We have seen many cool projects arising from Raspberry Pi boards and other similar SBCs (single-board computers). One that ranks right up there with the best of them is an internet-controlled RC car, by the same person who in December posted a Raspberry Pi 4 mod to stream Nintendo Switch games in real-time over the web.
The modder's name is Stan Dmitriev, and he is the CMO and co-founder of SurrogateTV. According to his Twitter bio, he's into robotics, chess, and esports. He is also a talented SBC enthusiast, as his latest project demonstrates once again.
For the RC car mod, Dmitriev used a Raspberry Pi 4 Model B with 4GB of RAM (it sits in between the 2GB and 8GB models), which goes for around $61 on Amazon. It's powered by a 64-bit Broadcom BMC2711 SoC with four Cortex-A72 cores running at 1.4GHz. It also features Wi-Fi 5 (802.11ac) and Bluetooth 5 wireless connectivity, four USB ports (2x USB 3.0 and 2x USB 2.0), two-lane MIPI DSI/CSI ports for camera and display, a microSD card slot, and various other bits. 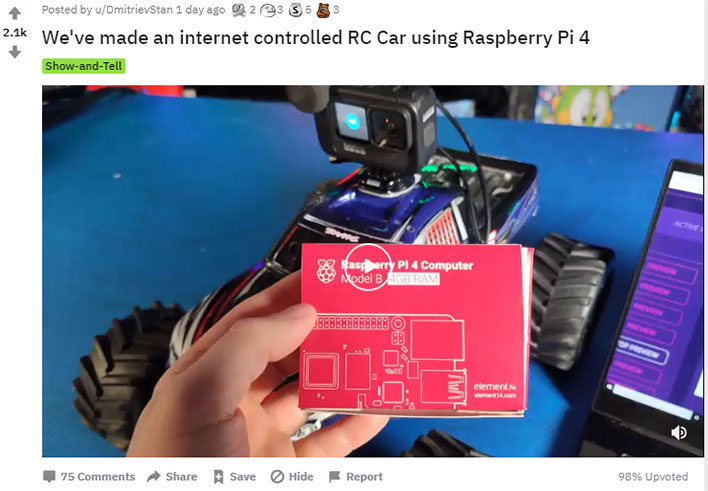 Dmitriev also worked a GoPro and capture card into his project, though notes users can employ a Raspberry Pi camera module or webcam instead.
"The setup runs via a website called Surrogate.tv and uses its open-source Python SDK. There's a premade game template for an RC Car setup, so you don't even need to code to replicate the setup," Dmitriev explains.
What is especially neat about this mod is being able to control the RC car through the web, with a pretty fast response time. According to Dmitriev, there is about a 200ms delay. That might be disastrous for gaming, but as he demonstrates in the video, it works really well with the RC car, which he can drive back and forth, and change direction, all while seeing a feed captured with the GoPro mounted on top.

This is something you could replicate yourself, if you are so inclined. Dmitriev posted a guide (embedded above), complete with links to various documentation and an SD card image to make it as easy as possible. If you do attempt this, he recommends using a 4x4 jeep or something similar, with a 1:16 scale being ideal for this project. That way it can go over different terrain without getting stuck.
As one of the commenters alluded to, this same mod could be applied to an RC boat, for some fun RC boat racing—no need to stick to land, if you don't want to. Either way, this is a really neat mod.