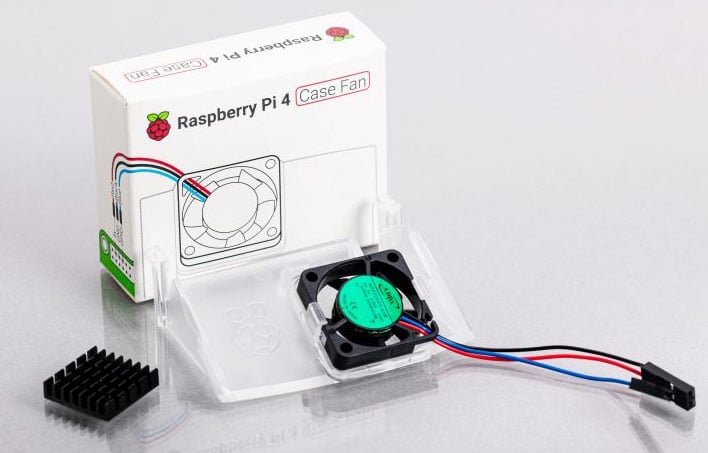 Aw, would you like at that, how adorable! I'm talking about the teeny-tiny case fan the Raspberry Pi Foundation has released for its Raspberry Pi 4 mini PC module. It is more of an cooling kit, actually, as it also comes with an aluminum (I presume it is aluminum, anyway) heatsink to attach onto the Raspberry Pi 4's system-on-chip.
While small in stature, do not let the little size fool you. The official case fan (cooling kit!) is designed with overclockers and power users in mind. It is not going to bring an arctic chill to the Raspberry Pi 4 like some elaborate liquid cooling setup, but it can offer a dramatic reduction in temps, according to the board maker. And that is important, because it means less throttling or no throttling at all.
It is pretty easy to install as well...

Does it truly help, though? Well, here are a pair of graphs that demonstrate the potential performance benefits, according to the Raspberry Pi Foundation. The first one (below) shows temps during a quad-core compile of the Linux kernel, on a Raspberry Pi 4 running inside the official case. Have a look...

You can see the board hits its throttle point at just over 80C, and slows down. This can make certain jobs (like compiling) take longer, compared to running the board outside of a case or with a third-party cooling solution to keep temps in check.
Now here's a look at the same job with the benefit of the official case fan...

The official case fan/kit allows the Raspberry Pi 4 to run at full blast indefinitely, with temps staying comfortably below 80C, and never even hitting 70C. It achieves this by drawing cool air in over the USB and Ethernet connectors, and directing it over the the finned heatsink that is attached to the processor. Hot air is then exhausted through the SD card slot.
According to the company's testing and data, temps even come in a bit below running the Raspberry Pi 4 outside of a case (without a fan). In both instances, the quad-core kernel compile job that was used for testing finished faster than running the Raspberry Pi 4 inside a case without a cooling fan.
"Raspberry Pi 4 was originally designed to operate in a 'sprint-and-recover' mode: if run at maximum performance for an extended period it would heat up, and eventually throttle back to limit its temperature," the Raspberry Pi Foundation explains.
"Maybe you want to put your Raspberry Pi in a case; or you’ve noticed that your Raspberry Pi will overclock to 1.8GHz or more; or you want to use it in a higher ambient temperature. All of these things can put us back in sprint-and-recover mode," Raspberry Pi Foundation adds.
The Raspberry Pi 4 cooling fan costs a reasonable $5 and is designed to work with the official case, which also costs $5. So between the two, you're looking at a $10 investment.