History has already been written, but had things gone just a little bit differently, we might find ourselves reflecting on the Commodore 65 as the greatest selling single model PC of all time. Instead it's the Commodore 64 bears that designation in the Guinness Book of World Records, as the decision to build a C65 came too late and was never actually released. However, there remain a small number of C65 prototypes in the wild, and one of them has landed on eBay.
I personally would like to see the alternate timeline where the C65 released. Like many geeks my age, I cut my teeth on the C64 before moving on to IBM compatible machines. Games like Karnov, The Last Ninja, L.A. Crackdown, and of course Maniac Mansion in all their C64 glory are forever etched in the memories of my youth. 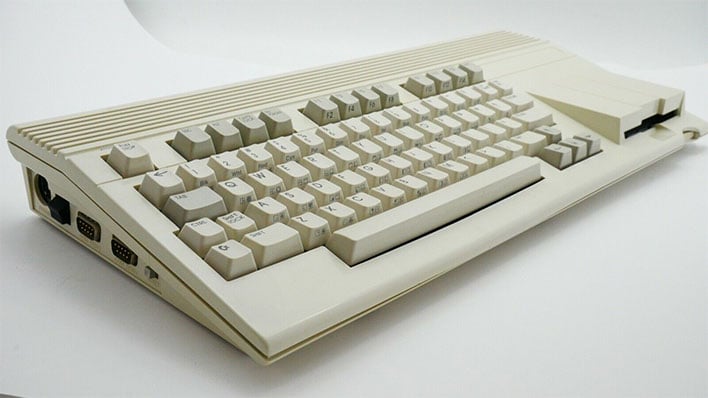 The C65 that never saw the light of day (in finalized form) promised backwards compatibility through emulation, a faster processor (3.54MHz!), an upgraded graphics chip, and a built-in disk drive, to name some of the highlights.

Working prototypes are supremely rare, and so these systems fetch big money on auction sites. At the time of this writing, the high bid (out of 48 bids so far) is 25,050 euros (around $27,037 in US currency). There are still five days to go before the auction ends.
"The C65 is highly sought and valued collector's items, especially when in fully working order: very few working machines are known to exist. But this particular unit is even much rarer. The plastic molds are not roughened so the case still has a high-glossy look and the POWER and DRIVE text is missing. The plastic molded cases of these ALPHA Units are totally rare, only a hand full are known to exist," the seller explains.
There's a yellow sticker on the bottom that states "Property of Commodore," along with some information about not being approved by the FCC. The seller claims there is no yellowing and only just "tiny minor scratches." Otherwise, the rare prototype is said to be fully working, as shown in the video above.
One thing North American bidders should be aware of is that this prototype is being sold with the 220V/230V European power supply.
Whoever ends up winning this auction will own a sweet piece of computing history, albeit a pricey one. If you're hoping to be that person, head over to the C65 auction page and place your bid.