Cyber-attacks have seemingly ramped-up in the last few weeks, like the Colonial Pipeline ransomware incident that netted a cool $5 million for the criminal attackers. Now, cyber-thugs have crippled the Irish Health Service Executive's (HSE) computer systems in what could be "the most significant cybercrime attack on the Irish state," notes Irish minister of state Ossian Smyth.

Yesterday, the Twitter account for the HSE, the primary health service provider in Ireland, tweeted that there has been a significant ransomware attack on its systems. To help contain this attack, the org decided to shut down all of the systems "in order to protect them from this attack and to allow us fully assess the situation with [our own] security partners." 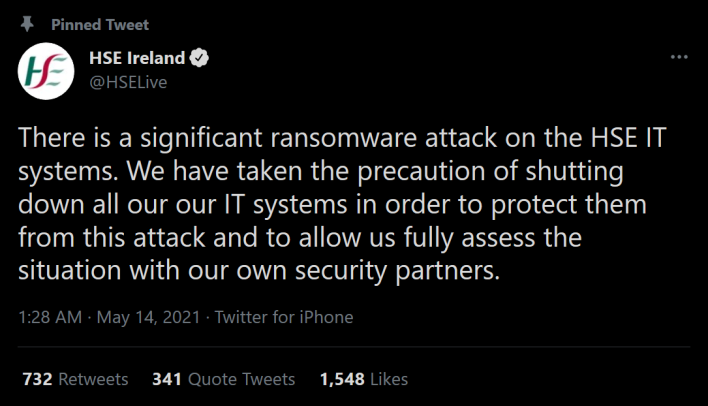 Since then, Ossian Smyth, the minister for public procurement and eGovernment, has reported that this was an international attack, adding that "These are cyber criminal gangs, looking for money." He then explained that "It's widespread. It is very significant, and possibly the most significant cybercrime attack on the Irish State." As such, the BBC is reporting that the Irish government is "deploying everything" in an effort to contain and control the cybersecurity threat.

Though systems are shuttered, it has had a mixed impact on health services around the country. Non-essential things such as outpatient visits have been canceled. COVID-19 vaccinations, testing, and other emergency services are still available, however, though it depends on which hospital services are needed from and what has been affected. There are also contingency plans for this in place, so some hospitals have been able to fall back on a paper-based system for the time being.

At time of writing, there has not been a ransom demand, though the official position of the organization is to not pay anything, according to Irish PM Micheál Martin. It will be interesting to see what the attackers do, as with this stance it's unlikely they will receive any monetary reward. Unfortunately, we have seen people die from ransomware attacks on hospitals, so perhaps they will unlock HSE's files and systems out simple human decency for the potential innocent victims? Either way, we'll be following the situation as it unfolds.