No, your Radeon RX 580 graphics card has not been recalled. If you receive an email or spot a notice that seemingly came from AMD or XFX stating the contrary, do not fall for the hoax, lest you end up scammed out of your graphics card in a time when GPUs are extremely hard to come by. It is the latest ruse by unscrupulous butt-hats who are trying to swindle unsuspecting victims.
Here's how the scam goes. Dealers in China have been sending out fake notices posing as AMD and XFX, saying there is a problem with the Radeon RX 580. It is effectively a fraudulent recall notice, of a card that has been discontinued.
The swindlers then offer to replace existing cards with something different. Specifically, the notice offers to swap a Radeon RX 580 with 4GB of memory, for a GeForce GTX 1050 Ti, and a Radeon RX 580 with 8GB of memory for a GeForce GTX 1060 with 3GB of memory.
To sweeten the pot, the fake recall notices also offer to compensate users with money—400 Chinese Yuan with the GeForce GTX 1050 Ti and 800 Chinese Yuan with the GeForce GTX 1060 3GB, worth around $60 and $120 in US currency, respectively. Sounds like an okay deal, except it's a bunch of hogwash. 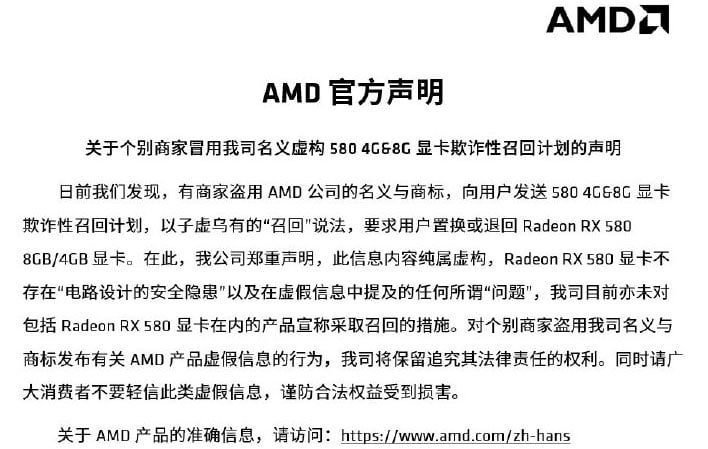 AMD issued a statement on Weibo warning of the scam. According an online translation of the text in the image, AMD says a merchant stole its name and trademark, and that any claims that there are "security risks in [the Radeon RX 580's] circuit design" or other "problems" are simply false. AMD also said it will take legal action against any outfit found perpetuating this scam.
XFX also issued a statement, saying its name and trademark has been stolen as part of this ruse as well. It basically echo's AMD's remarks, telling customers to beware of the scam.
Part of the reason for the ruse is that some people are scum. Beyond that, however, this seems related to the rise in cryptocurrency mining, which has affected the resale value of graphics cards.
Ethereum in particular is still mined with GPUs, and the Radeon RX 580 seems like a good target for something like this, given its age (it's probably easier to swindle someone out of an older GPU that still has value, versus a more modern GPU with a potentially much higher value).
In any event, don't fall for this.