It's been a long time since the wireless market felt stagnant. There's been some rapid fire advances in wireless technologies, and while you may not be on Wi-Fi 6E or even Wi-Fi 6 yet, work is already under way to bring Wi-Fi 7 solutions to market. To that end, Qualcomm today announced its Wi-Fi 7 capable Networking Pro Series Gen 3 family.
Qualcomm's third-gen Networking Pro platform is being pitched as the world's most scalable Wi-Fi network platform portfolio commercially available. What that entails are blazing-fast offerings ranging from half a dozen on up to 16 streams for next-gen enterprise access points, carrier gateways, and high-performance routers for gamers.
One potential downside to the accelerated pace of new Wi-Fi technologies is that it's not always feasible to constantly upgrade your home or business network. Backwards compatibility is key, and Qualcomm ensures that its latest generation Networking Pro platforms benefit existing Wi-Fi 6/6E setups with improved speeds, lower latency, and enhanced networking utilization as well.
Those who are in a position to upgrade when the time comes, however, stand to benefit from "game-changing throughput and incredibly low latency" for the next round of Wi-Fi 7 client devices. It's important to note that Qualcomm's new platforms are one half of the equation for routers and access points—the other half is the client side, with devices (desktops, laptops, tablets, smartphones, and so forth) needing to be equipped with Wi-Fi 7 hardware to take full advantage of what's on tap here.
So, what exactly is on tap? 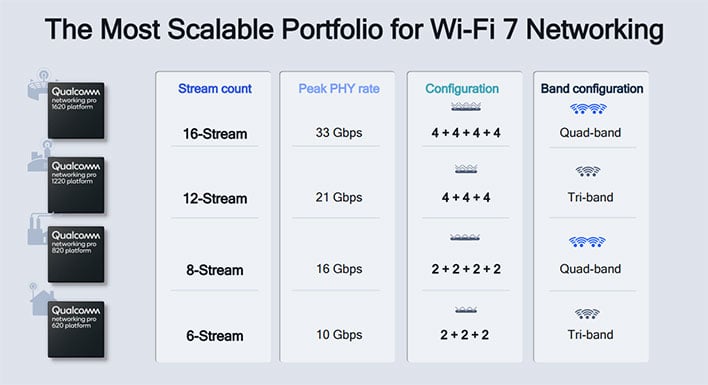 There are four third-generation Networking Pro platforms, including the 6-stream 620, 8-stream 820, 12-stream 1220, and 16-stream 1620. This effectively boils down to options for two or four streams in the 2.4GHz, 5GHz, and 6GHz bands, with support for tri-band and quad-band routers and access points.
As shown in the slide above, Qualcomm is claiming peak per-channel wireless PHY throughput of more than 10Gbps for point-to-point connections, and full system aggregate PHY rates of up to a staggering 33.1Gbps in the flagship 1620 platform.
"Qualcomm Technologies has enabled the era of 10Gbps Wi-Fi with our first customer deliveries of the Wi-Fi 7 Networking Pro Series," said Nick Kucharewski, senior vice president and general manager, Wireless Infrastructure and Networking, Qualcomm Technologies, Inc. "Combining support for the latest Wi-Fi 7 innovations with our unique product architecture, the platform enables solutions ranging from whole-home mesh to connectivity networks for large public venues. With this product line, we anticipate a new class of customer systems for both today’s applications and the emerging Wi-Fi 7 ecosystem." 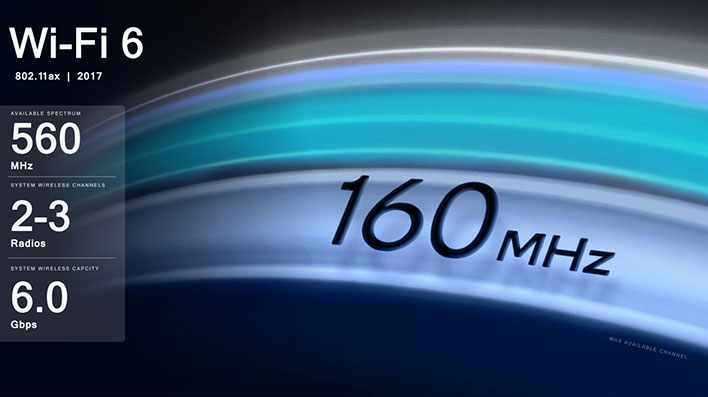 By modern standards, Wi-Fi 6/6E is very fast and still gaining a foothold in the marketplace. If you haven't already, check out our 2.5 Geeks episode from last November in which we discussed why you should care about Wi-Fi 6E. Both Wi-Fi 6 and 6E support channel widths up to 160MHz for up to 9.6Gbps of theoretical max throughput, and use 1024 Quadrature Amplitude Modulation (1204-QAM) to push up to 25 percent more data into the same frequency range.

Wi-Fi 6E builds on Wi-Fi 6 by adding a new block of spectrum, the 6GHz band, paving the way for an additional 14 channels that are 80MHz wide, or seven 160MHz channels. Then there's Wi-Fi 7... 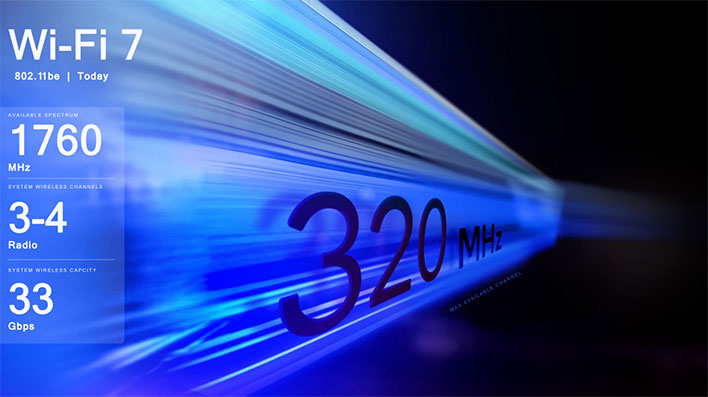 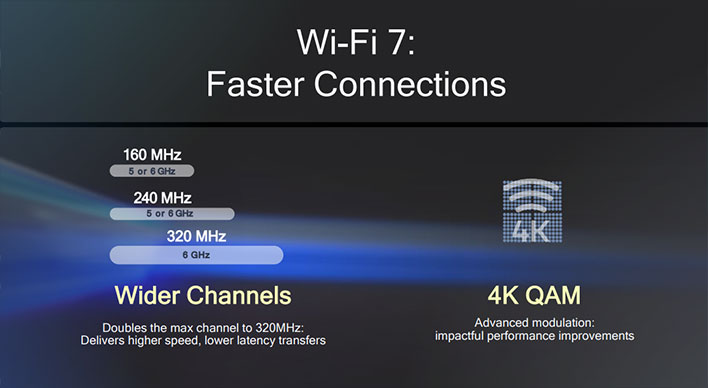 Wi-Fi 7 ups the ante with support for channel widths up to 320MHz (single channel or 160MHz + 160MHz), delivering a 2X increase in throughput over Wi-Fi 6. In theory, this paves the way for full band throughput to reach 46.1Gbps (16x16), though Qualcomm is targeting 33.1Gbps at the high end initially.
On top of support for wider channels, there's an upgrade to 4096-QAM (or 4K QAM) to better utilize the available spectrum. From Qualcomm's perspective, Wi-Fi 6 was primarily about delivering massive amounts of data capacity through multi-user technologies like OFDMA and MU-MIMO, while "Wi-Fi 7 turns the task to surging performance—specifically, for ultra-low latency, extremely high throughput, and ever-higher capacity through the most efficient use of spectrum." 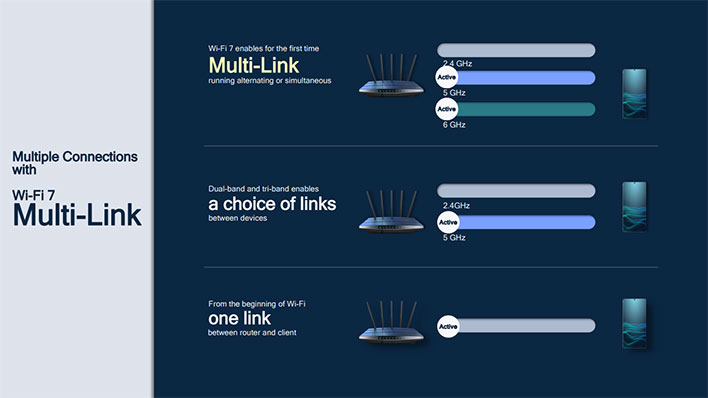 The other notable bit here is that Wi-Fi 7 enables multi-link operation (MLO) for the first time. This allows traffic to dynamically aggregate or alternate bands to avoid bumping into each other. In turn, Wi-Fi 7 is capable of delivering deterministic, predictable low-latency connections in heavily congested environments.
Qualcomm further notes that when paired with Wi-Fi 7 client systems like its FastConnect 7800 we wrote about in February, its new platforms can offer support for what's called high band simultaneous (HBS) multi-link. This leverages the performance of 5GHz and 6GHz bands to deliver the best throughput and latency possible.
In short, Wi-Fi 7 will deliver much faster speeds, even lower latency, and superior handling of multiple devices on crowded networks. All of these are important factors to continue pushing the envelope to enable advanced wireless experiences, like the metaverse, cloud gaming, and so forth.
While it will take some time for Wi-Fi 7 to have a meaningful impact on the wireless landscape at large, Qualcomm says it is already sampling its Wi-Fi 7 networking platform portfolio.