Qualcomm on Tuesday announced its Snapdragon W5+ Gen 1 and W5 Gen platforms, calling the latest hardware upgrade its "most advanced leap yet" in the wearables sector. That's not just marketing hyperbole, either. Qualcomm is claiming twice the performance and a massive uplift in battery life compared to its Snapdragon 4100+ platform.
One thing you'll notice right away is that Qualcomm has dismissed its Snapdragon Wear branding. Qualcomm has simplified its branding over the past year, and as it applies to wearables, the new W5+ and W5 take the baton. Both of these are built on a cutting-edge 4-nanometer manufacturing process, which is a huge leap (in manufacturing tech) from the 12nm node used for the Snapdragon Wear 4100+. That's for the main chip. The W5+ Gen 1 earns its "Plus" designation by including a 22nm always-on (AON) coprocessor. 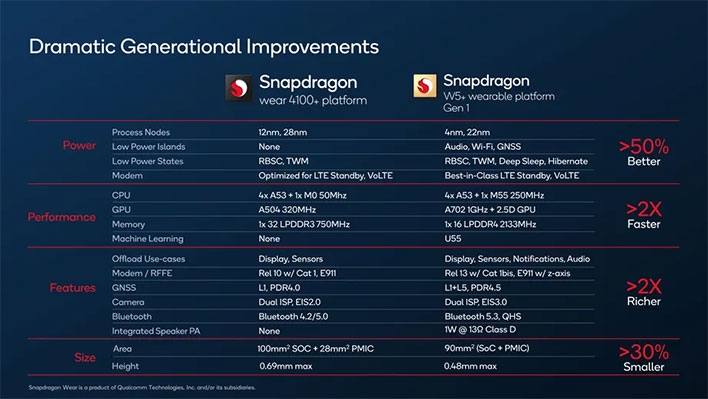 Diving deeper into the specifications, the primary chip packs four Arm Cortex-A53 cores, along with a single Cortex-M55 core (250MHz) to handle artificial intelligence and machine learning workloads. And for graphics, there's an Adreno 702 GPU clocked at 1GHz, which represents a significant upgrade over the Adreno 504 GPU clocked at 320MHz that Qualcomm used for its Snapdragon Wear 4100+. Rounding things out is support for 16GB of LPDDR4-2133 RAM. 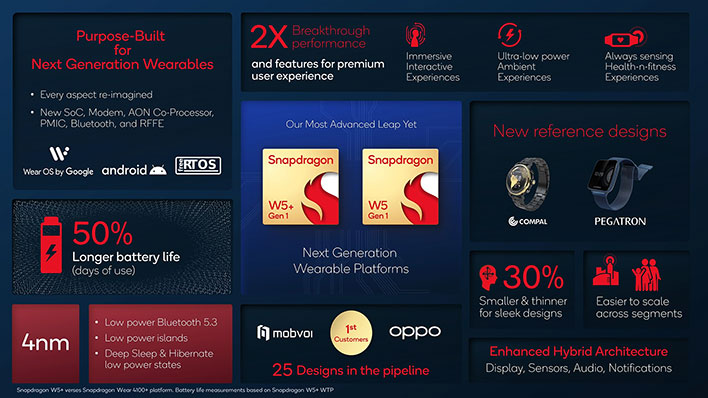 It's fair to point out that Qualcomm could have used even more powerful cores in its W5 chipsets, such as the Cortex-A55. However, there's quite a bit of muscle on tap for wearables here. According to Qualcomm, the enhancements it made to its hybrid architecture enable a 2X performance uplift, 2X richer features, and 50 percent lower powered, all in a 30 percent smaller package compared to the previous generation.
"Purpose-built for next generation wearables, these platforms address the most pressing consumer needs by delivering ultra-low power, breakthrough performance, and highly integrated packaging. Additionally, we extend our proven hybrid architecture with new low power innovations such as Deep Sleep and Hibernate states delighting consumers with premium user experiences while extending battery life," Qualcomm's Pankaj Kedia said in a statement.
The Snapdragon W5+ and W5 Gen 1 should pave the way for some impressive smartwatch releases to compete with the Apple Watch. To get things started, Qualcomm announced two reference designs from Compal and Pegatron to showcase the capabilities of its new chipsets. Additionally, Qualcomm says there are over two dozen designs in the pipeline.