Qualcomm has been on a crusade to iterate at lightning fast speeds with its smartphone SoCs, but the same can’t be said for its efforts with the rapidly growing wearables market – specifically with smartwatches. The company announced its lightly refreshed Snapdragon Wear 3100 platform way back in September 2018, which itself came more than two years after the introduction of the Snapdragon Wear 2100.

Today, Qualcomm is taking another step forward with the new Snapdragon Wear 4100 platform, which is built on a smaller 12nm process node versus the relatively ancient 28nm on its predecessor. The chip company is promising significant gains not only in performance with new processor architecture, but also “substantial improvements” with respect to power efficiency. 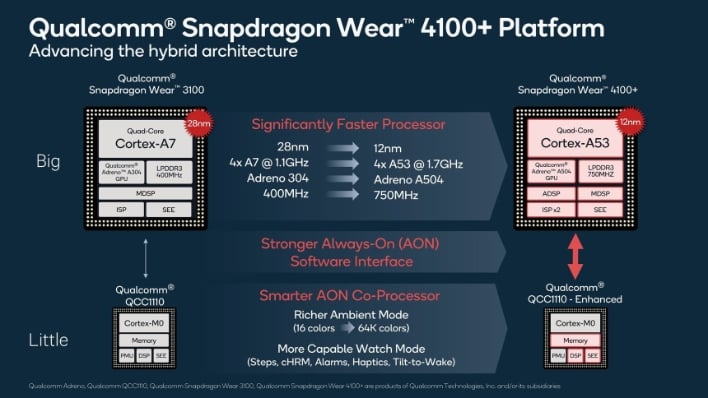 There are two distinct members of this new wearable platform: Snapdragon Wear 4100 and Snapdragon Wear 4100+. The Wear 4100+ uses a primary SDM429w SoC with four Cortex-A53 cores running at 1.7GHz (versus 4 Cortex-A7 cores running at 1.1GHz for its predecessor). There’s also an Adreno A504 GPU running at 750MHz and an AON coprocessor to support an enhanced version of ambient mode (i.e. 64,000 colors are now supported with ambient mode versus the previous 16). You’ll also be able to see things like step and heart-rate tracking in this mode. The Wear 4100 is differentiated by the fact that it doesn’t include the AON coprocessor, and hence will offered at a lower price to OEMs.

Given that the Wear 3100’s roots extend well back to 2016, it should come as no surprise that Qualcomm’s generational performance gains are staggering (at least on paper). The company says that overall performance has increased 85 percent, while graphics performance specifically has witnessed a 2.5x uplift. In addition, power consumption is now 25 percent lower, which should translate into extended runtimes. 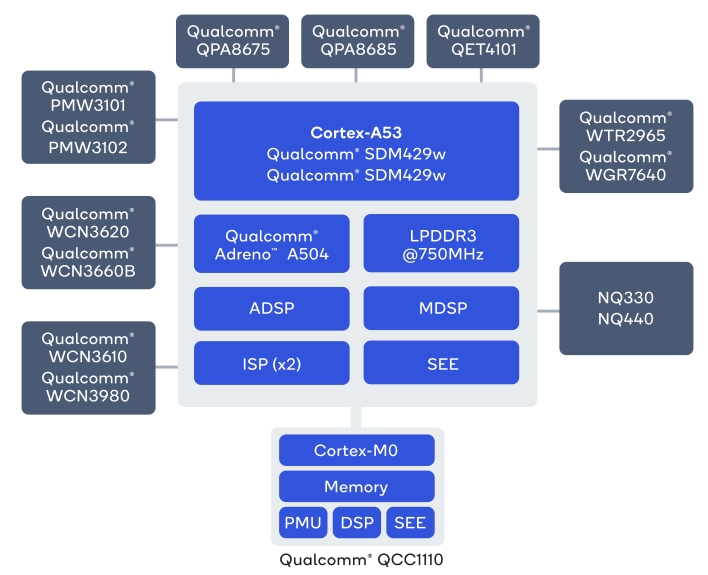 The question, however, is whether this will be enough to give smartwatches running Google’s Wear OS a fighting chance against the dominant Apple Watch. According to recently released market share figures from Canalys, the Apple Watch was the runaway leader in the segment with a 36.3 percent share of the market in Q1 2020 compared to 14.9 percent for second-place Huawei. As a whole, just 4.2 percent of all smartwatches sold during Q1 2020 were running Wear OS.

The reason for this laggard performance is that Qualcomm chips and Wear OS in particular have lagged in functionality – especially with regards to health-tracking – compared to rival entries from Apple and Samsung. Both of those companies use their own custom SoCs to power their smartwatches, and are more frequently updated. With that being said, Qualcomm is optimistic about the future for Snapdragon Wear 4100.