In due time, Qualcomm is expected to release a Snapdragon 888 Plus system-on-chip, just as there were Plus versions of the Snapdragon 865 and Snapdragon 855 SoCs. What comes after that, however, is shaping up to be a pretty big upgrade according to the latest leak, which claims Qualcomm's next premium SoC will be built on a 4-nanometer manufacturing process.
That makes sense, given that the Snapdragon 888 is built on a 5nm node. Let's quickly recap that part before moving onto the latest rumor.
Qualcomm's existing flagship mobile chip features around 10 billion transistors, an eight-core CPU (four Kryo 680 Silver cores clocked at up to 1.8GHz, three Kryo 680 Gold cores clocked at up to 2.42GHz, and a single Kryo 680 Prime core clocked at up to 2.84GHz), an Adreno 660 GPU clocked at up to 840MHz, a Hexagon 780 DSP, and a Snapdragon X60 5G modem.
Now, back to the rumor. Prominent leaker Evan Blass shared some information about Qualcomm's next premium SoC, labeled as SM8450. For reference, the Snapdragon 888 is an SM8350 part, so clearly the leak applies to the next big Snapdragon upgrade, we just don't know what it will be called (Qualcomm is a bit unpredictable in that regard). 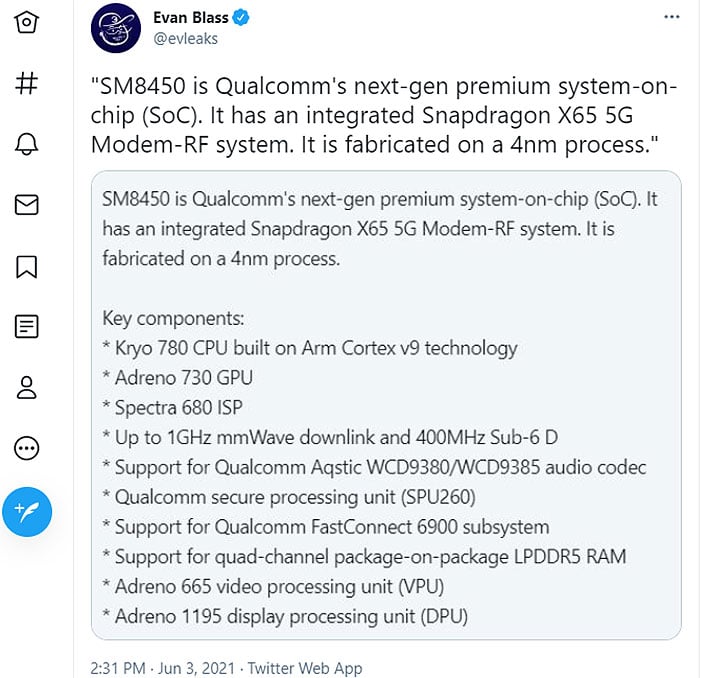 In any event, the next major Snapdragon SoC will get a Kryo 780 CPU infusion, based on Arm's Cortex v9 architecture. It is not said if Qualcomm will stick with a 1 x 3 x 4 core arrangement, but it is definitely possible, and maybe even likely. If that is the case, then based on what Arm has already unveiled, we could be looking at a design consisting of a Kryo 780 Prime core (Cortex-X2), three Kryo 780 Gold cores (Cortex-A710), and four Kryo 780 Silver cores (Cortex-A510).
Arm has said its v9 technology will leverage a combination of Cortex CPU, Mali GPU, and Ethos NPU hardware to accelerate machine learning. It's also focused on delivering gains in DSP performance and bolster security.
For this upcoming mobile chip, we're looking at an Adreno 730 GPU and a Spectra 680 ISP (perhaps with quadruple concurrency), according to the leaked information. We're also looking at the inclusion of a Snapdragon X65 5G modem being integrated into the chipset. Announced earlier this year, the Snapdragon X65 can deliver data transfer speeds of up to 10Gbps, up from 7.5Gbps on the Snapdragon X60.
What this is all means is that next-generation Android phones will have some serious hardware to work with, at the flagship end of the spectrum.