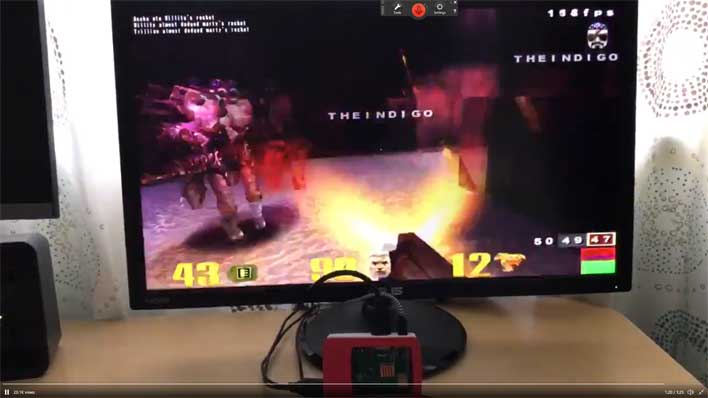 Martin Thomas is an NVIDIA engineer, and he has concocted something very cool that fans of retro games and tiny single board PCs will really appreciate. He has taken an inexpensive Raspberry Pi 3B+ and transformed it into a machine that is capable of running a version of Quake3 at over 100 fps. To get the game to run at that frame rate on the basic Pi hardware, Thomas created a new low-level Vulkan-based RPi-VK-Driver for the RPi platform and used it to power VkQuake3 on the Raspberry Pi.

Quake 3 fans and Raspberry Pi tinkerers who want to build a machine to run the game themselves can do so since the driver used is publicly available on GitHub. The RPi-VK-Driver v1.0 can now also be downloaded directly from GitHub and installed using the steps below:

The driver instructions do note that if the boot mode is set to Desktop, users will need to switch tty console for modesetting to work using ctrl+alt+f1. If that step isn't taken, the system won't allow users to do display modesetting, returning to the Desktop is achieved using ctrl+alt+f7.

VkQuake3 running at 100+ FPS on a @Raspberry_Pi 3B+ using the new low level RPi-VK-Driver pic.twitter.com/UhhYgQrAEi

The vkQuake3 v1.0 software to run Quake 3 on the Raspberry Pi hardware can be downloaded from GitHub as well. Those wanting to build their own Pi Quake rig will need to own Quake III Arena, which can be purchased at Steam for $14.99. Some of the game files have to be copied from the Steam installation to run the game.

The Raspberry Pi 3+ used for this project isn't the latest version of the Pi on the market. In May, the Raspberry Pi 4 debuted with 8 GB of RAM slotting in the line along with the 2 GB and 4 GB existing options. A 64-bit Raspbian OS beta launched at the same time to take advantage of the extra RAM.