When we evaluated how many CPU cores you need for a great gaming experience, our benchmark data showed that a 6-core/12-thread processor was the sweet spot. That was nearly a year ago, and generally speaking our conclusion probably still stands (Intel's hybrid Alder Lake architecture throws an interesting wrench into the machine). Incidentally, hexa-core processors now represent the majority of gamers on Steam, the latest Steam survey shows.
Or to put it more accurately, the majority of gaming PCs pinged for the monthly survey. That's an important distinction because the hardware survey is not a count of every single PC that logs into Steam. There are other factors that can affect the data as well, such as multiple users logging into Steam from the same PC, as might happen at an internet cafe.
Be that as it may, Steam survey data is one of the better snapshots of the PC gaming space because of the huge popularity Valve's digital distribution platform. And what the data shows for March is that CPUs with six physical cores leapfrogged CPUs with four physical cores for the top spot, in terms of usage. 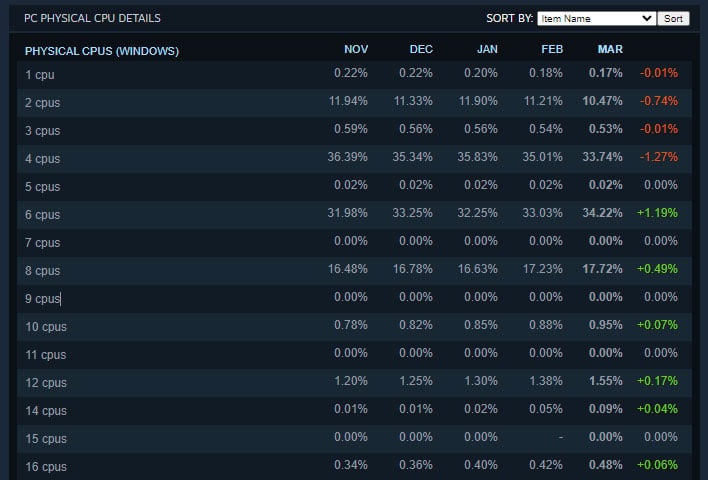 There was a 2 percent different in February, which at the time favored 4-core chips. But tallying up the numbers for March, 6-core CPUs accounted for 34.22 percent of systems pinged, versus 33.74 percent of systems with a 4-core CPU.
That only amounts to half a percentage point, but will probably grow over time if the current trend continues. Just a few months ago, for example, 4-core CPUs accounted for 36.39 percent of PCs pinged, versus 6-core CPUs accounting for 31.98 percent.
This was bound to happen sooner or later. AMD and Intel are pushing higher core counts these days. AMD's Zen 3 lineup, for example, is almost devoid of anything with fewer than six cores (there just a few exceptions, like the Ryzen 3 5425U).
As for the split between AMD and Intel, the latter increased its lead slightly in March. Intel CPUs now account for 69.32 percent of gaming PCs on Steam (up from 69.06 percent in February and 68.5 percent a few months ago), while AMD CPUs account for 30.66 percent (down from 30.92 percent in February and 31.35 percent a few months ago).
It will be interesting to see how the split trends in Steam's hardware survey as Alder Lake as the months go on. Alder Lake will continue to mature and stretch its legs, while AMD just recently added a few new lower cost SKUs to its lineup as part of its Spring CPU refresh, as well as the Ryzen 7 5800X3D.