Sony is celebrating PlayStation Plus, which launched on June 29, 2010. While taking time to thank everyone who supported PlayStation Plus over the last decade, several new games are also being added to the service. The new games available for PS Plus members lands on July 7 and are available until August 3.

The first of the games is a very popular one: NBA 2K20. This game is interesting because it was more than a typical basketball simulator offering players an open-world neighborhood that allowed them to explore and play together. The game also has an upgraded motion engine, advanced shooting controls, a dribble size-up system, and lots more. This is one of the most popular entries in the NBA 2K franchise to date. 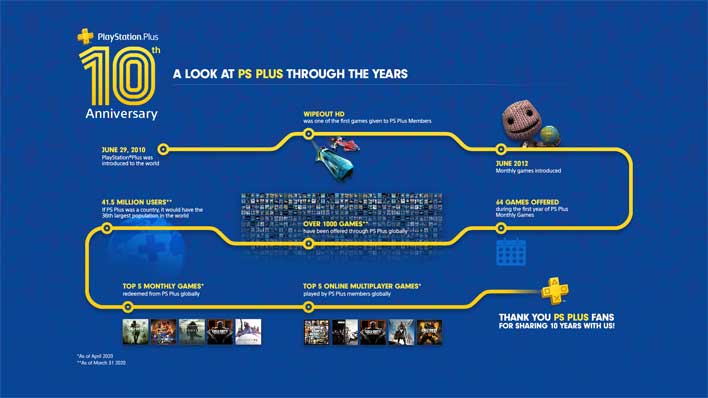 Another game being offered is Rise of the Tomb Raider: 20 Year Celebration. This game follows Lara Croft as she traces a mystery that makes her a target of an organization known as Trinity. The game has Lara trying to find a powerful artifact before Trinity can get hands-on it. The trail leads Croft to search for the Lost City of Kitezh.

Another game is called Erica, a unique game that is a feature-length cinematic experience that is part Hollywood movie and part video game. This game has real actors and puts players in the perspective of Erica, who is a young woman with nightmares of her father's murder. The choices players make in the game influences how the game develops with multiple endings to enjoy.

Sony has also announced that it will be offering a free PlayStation 4 theme later this week to celebrate the 10th birthday of the service. Gamers who haven't yet tried PlayStation Plus will also be able to experience the service during a free online multiplayer weekend that starts July 4 and runs through July 5 at 11:59 PM.

In other interesting PlayStation news, Sony recently announced a PlayStation Bug Bounty program that could pay out $50,000 for critical vulnerabilities.