This has been one hell of a year in many respects, and so it is only appropriate that 2020 comes to an end with the devil making an appearance. The "Red Devil," that is, once again summoned by PowerColor, this time to torture games for all of eternity (or at least the next few years) with factory overclocked Radeon RX 6800 XT and Radeon RX 6800 graphics cards.
PowerColor teased these cards last week when it showed off a partial glimpse of the cooling shroud. However, there was not a whole lot to fix your eyes one—basically just a portion of the backplate with the Red Devil logo glowing red. Now we get to see the cards from all angles, and boy-oh-boy are these things big. 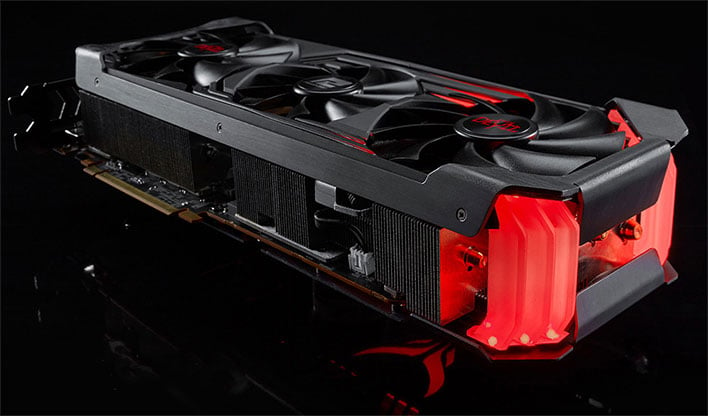 They are also menacing, at least from the press renders. I'm sure the actual cards will look a little different than the renders, but in the image above, those support columns glow lava red, as if flowing straight out of hell.
Running hot is not the name of the game, of course, and that is why these cards are outfitted with chunky cooling solutions. 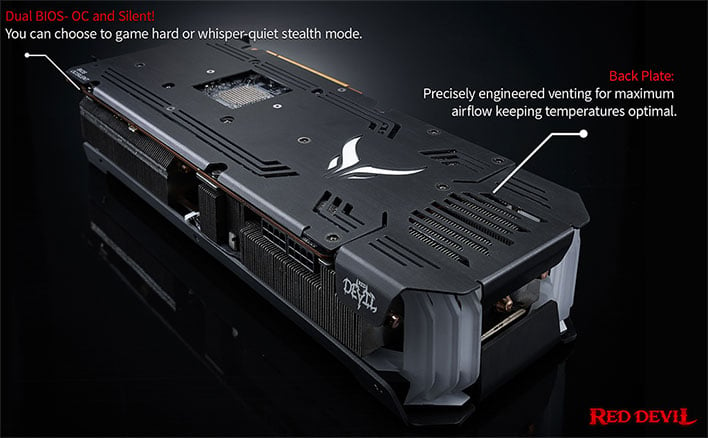 Both the Radeon RX 6800 XT Red Devil and Radeon RX 6800 Red Devil use the same cooler, which takes up three expansion slots. That should not be a big deal in most setups, given that AMD and NVIDIA have both by and large gravitated away from promoting dual graphics cards (with a few exceptions). And these days, motherboards typically embed many of the things that in the past may have required an expansion card, like a dedicated sound card, network interface card (NIC), or Wi-Fi adapter.
These cards sport three cooling fans and a whole lot of finned aluminum. And with a dual-BIOS setup, gamers can choose between overclocked settings with a more aggressive fan profile, or a quieter running card with tamer clocks. That said, PowerColor has not yet revealed what the overclocked frequencies.

It also remains to be seen what kind of overclocking headroom exists beyond the factory settings. The cards employ a 14+2 phase VRM with DrMos and high polymer capacitors, and are fed power by way of a pair of 8-pin PCIe connectors. And for connectivity, these cards feature two DisplayPort connectors, and HDMI output, and a USB-C connector, all of which are LED backlit (PowerColor's normal variants trade the USB-C port for another DisplayPort connector).
Pricing and availability have yet to be announced. Expect to pay a premium, though, because of the custom bits and the fact that these are limited edition models.