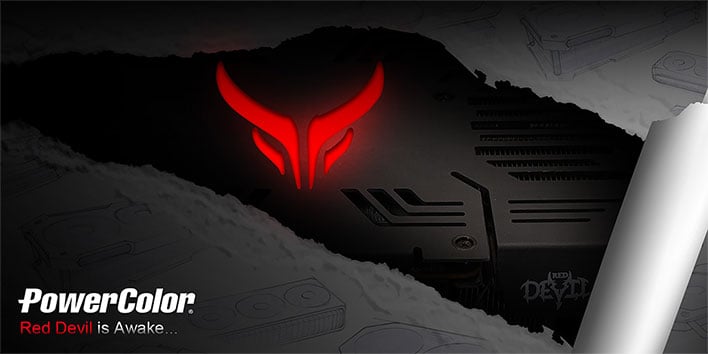 To quote Jack Nicholson as The Joker, "Have you ever danced with the Devil in the pale moonlight?" Well put on your dancing shoes, because PowerColor is getting raise to raise hell (again), with the Radeon RX 6800 XT Red Devil. No release date has been set, but it is possible the card will arrive later this month, when the Radeon RX 6800 XT launches to retail.
The Radeon RX 6800 XT is one of three new cards based on AMD's second generation Radeon DNA architecture, otherwise known as RDNA 2. It sits in the middle of the pack (so far), wielding 77 compute units (CUs) and 16GB of GDDR6 memory. It has a 2,015MHz game clock and 2,250MHz boost clock, and 128MB of Infinity Cache.
Priced at $649 MSRP, this is meant to compete with NVIDIA's GeForce RTX 3080. And according to AMD, the Radeon RX 6800 XT trades blows with competition, with the company's own performance comparison showing it being a tad faster in most games (Borderlands 3, Call of Duty: Modern Warfare, Doom Eternal, and others). We'll have to wait and see.
The Radeon RX 6800 XT is set to debut at retail a little over a week from now, on Wednesday, November 18. Might that also be when PowerColor unveils its Red Devil variant? Quite possibly.
PowerColor has been teasing a Red Devil version since last month, saying "something big is coming...are you ready?," in a post showing an engineer scribbling together sketches of the card. Then today, it posted another teaser on social media, which shows the sketch being torn back to reveal an illuminated Red Devil logo and part of the upcoming graphics card.
The Red Devil line is PowerColor's premium offering in the custom space. For example, the Radeon RX 5700 Red Devil sports a triple fan design and 300mm cooler, which in and of itself isn't anything overly special, but it also has a "state-of-the-art PCB design and 10 VRMs using DrMos and high-polymer capacitors capable of over 300W of power."
It basically boils down to higher end components and a dual BIOS, for faster performance out of the box (they're factory overclocked) and potentially higher overclocking capabilities. But we'll have to wait and see the Radeon RX 6800 XT performs in general, let alone custom variants.
It is also worth noting that initial stock will almost definitely go fast, just as we have seen with the the GeForce RTX 30 series, and even AMD's Ryzen 5000 series CPUs. As it pertains to GPUs, ASUS has already warned that stock will be limited. So in other words, raising hell on the consumer side may have to wait.