Did Porsche Just Tease Its Next Generation 911 GT3 Track Monster? 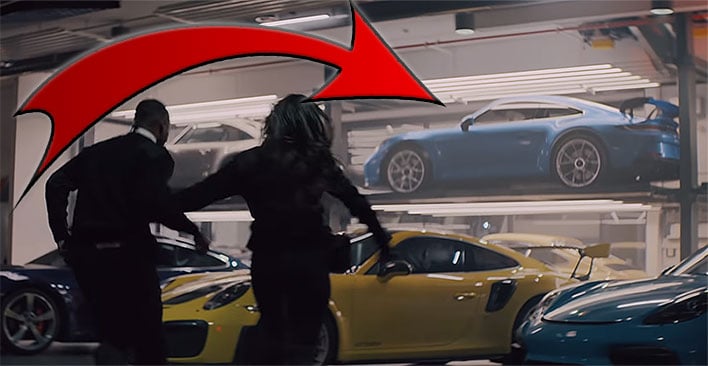 Ahead of the Super Bowl this weekend, Porsche posted an extended cut of "The Heist," an advertisement that will run during the big game. That itself is mildly interesting (some people tune into the Super Bowl just for the commercials), but even more intriguing is what it might reveal—a first look at the upcoming 2021 model 911 GT3.
That is not the focus of the commercial. Porsche is showing off its electric Taycan Turbo S in what will be the automaker's first Super Bowl advertisement since 1997 (Super Bowl ads are crazy-expensive, so it's easy to see who Porsche has held out for so long).
The ad begins with security workers making the rounds at the Porsche Museum in Germany. Initially undetected, thieves attempt to steal the Taycan Turbo S, which eludes the guards by rolling through the museum silently. That is, until it crosses over those pesky red laser beams, triggering an alarm in the process.
Have a watch...


The guards scramble to catch the thieves, with one of the workers calling dibs on a sweet 918 Spyder. If you look closely, however, what looks to be the 2021 911 GT3 sitting in the background. It's visible starting at the 44-second mark and can be seen off-and-on for several seconds (through the 49-second mark, after which its cameo comes to an end).
It never comes fully into focus. I've sharpened the screenshot in the image at the top of this article, but it remains partially blurred. Nevertheless, we can make out a few details. It's blue, for one, but we can also see large brakes, center-lock wheels, the biggest telltale sign of the mall, a large rear wing.
The general consensus is that this is not your typical 992-generation GT3. Built for the track, it sure looks like Porsche is getting ready to introduce a new 911 GT3 with a whole lot of horsepower in tow. Stay tuned, folks!