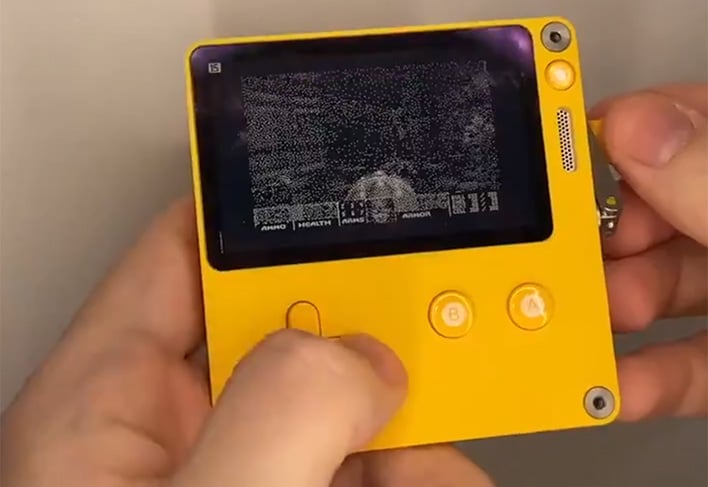 Remember the little yellow handheld console called PlayDate? It is an adorably sized game system with a monochrome display and unique hand crank, and it is still being developed for an eventual release. While we wait, the company behind the PlayDate, Panic (the same company that published the popular Untitled Goose Game), bombarded Twitter with a bunch of videos showcasing the console in action.

"Hello. We’ve been working non-stop to finish up Playdate, but in the meantime, we wanted to give you a small update on our Playdate Developer Preview," Panic said. "It's a lot of fun news."

According to Panic, actual PlayDate units are now in the hands of 250 people around the world, presumably developers and testers. It is not clear if the units that are out in the wild are prototype versions or finalized hardware, but either way, Panic took the opportunity to highlight some of what its partners have been working on.

Over 250 people around the world now have actual Playdates in-hand. They’re putting our tools and tech to the test, building the world’s first third-party Playdate games.

Rebecca (@veubeke) is working on this gorgeous dungeon crawler. pic.twitter.com/orKYzel051

One of them is a dungeon crawler. Obviously there is only so much that can be done on a 2.7-inch monochrome display (400x240 resolution) powered by a 180MHz STMicroelectronics STM32 F746 processor and 16MB of RAM, along with 2GB of onboard storage. But it seems that developers are off to a rocking start.

Hell, even Doom was demonstrated on the PlayDate, because why not? Getting Doom up and running has become sort of a right of passage (it has even been shown running on fancy scientific calculators in the past). Have a look...

And finally, it didn’t take long for DOOM to show up, as per tradition! This amazing effort from Nic (@NicMagnier) delighted us all — and yes, it features Crank to Chaingun™ pic.twitter.com/Rv51WDUwil

The PlayDate sports a D-pad and A/B buttons, along with the hand crank. In the Doom demo, the crank is used to great effect, firing off repeated rounds from the rapid-firing chaingun.

Here is a look at a few other game clips on the PlayDate...

RNG Party (@RNGparty) is using Playdate’s accelerometer in a fun and inventive way! (Sometimes we forget it even has one.) pic.twitter.com/vRMV6N1c5l

Donald (@dovuro) is building a really fun-looking puzzler. As always, some games use the crank, others don’t. pic.twitter.com/gF1vg4pm1X

Matt (@gingerbeardman) discovered something that a crank controller is REALLY good for… drifting! pic.twitter.com/ShZDOwk3Xz

The only real bummer here is that not everything show will necessarily see the light of day. However, Panic promises a "BIG UPDATE" on preorder availability is coming within the next few months.

"It’s so early! There’s too much to tweet! And not all of these projects will ship! But it has been amazing to see these devs, experienced or otherwise, get up and running quickly. Remember: every Playdate is a dev kit. You can make your own games when you get yours. If you want," Panic says.

PlayDate will cost $149 when it arrives, and will ship with 12 included games as part of Season One for no additional charge. While we don't know exactly when it will debut, the product page still indicates it will ship in 2020, albeit with "very limited" stock.