A new study by researchers at UC Riverside created detailed models on data from the solar system as it appears in modern day, as well alternatives to the solar system with a slightly different orbital path. One alternative solar system appeared to be effective in making Earth more habitable, by simply making Jupiter's orbit more eccentric. In doing so, the researchers have seemingly debunked the long-held view that any change to Jupiter's orbit would be detrimental for Earth.

"If Jupiter's position remained the same, but the shape of its orbit changed, it could actually increase this planet's habitability," stated Pam Vervoort, UCR Earth and Planetary Scientist and lead study author.

Currently, the Earth's surface is habitable for many known life forms. However, if Jupiter's orbit were more eccentric, it could create an orbital path for Earth that draws it closer to the sun at times. This would change the landscape of regions on Earth that are currently sub-freezing, by increasing the temperature into a more livable climate zone. This new result has recently been published in the Astronomical Journal, and "up-ends two long-held assumptions about our solar system.

"Many are convinced that Earth is the epitome of a habitable planet and that any change in Jupiter's orbit, being the massive planet it is, could only be bad for Earth," Vervoort explained. "We show that both assumptions are wrong." 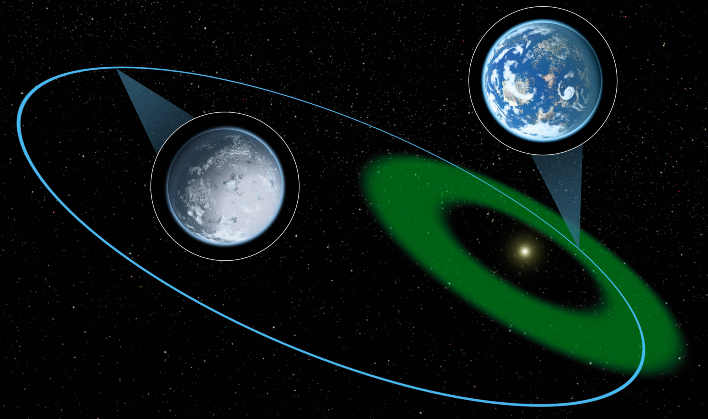 The new finding is encouraging, as researchers and scientists seek out other habitable exoplanets around other stars.

Astrophysicist Stephen Kane says that the first thing one looks for in a habitable exoplanet, is the distance between a star and a planet in order to determine if there's enough energy for liquid water on its surface. Having water on its surface is only a simple first metric, though. It does not indicate a planet's orbit, or the seasonal variations it might experience.

While telescopes are more than capable of detecting a planet's orbital path, there are many other factors that could come into play in terms of a planets ability to sustain life. How much the planet is tilted toward, or away from its host star, would influence how warm or cold a planet's surface actually is.

In another model, the researchers were also able to determine that if Jupiter were closer to the sun, it would create an extreme tilting of Earth, and in turn "make large sections of the Earth's surface sub-freezing."

The bottom line is, the orbit of a giant planet such as Jupiter is crucial in learning more about the habitability of other planets in other systems. Kane points out, "It's important to understand the impact that Jupiter has had on Earth's climate through time, how its effect on our orbit has changed us in the past, and how it might change us once again in the future."