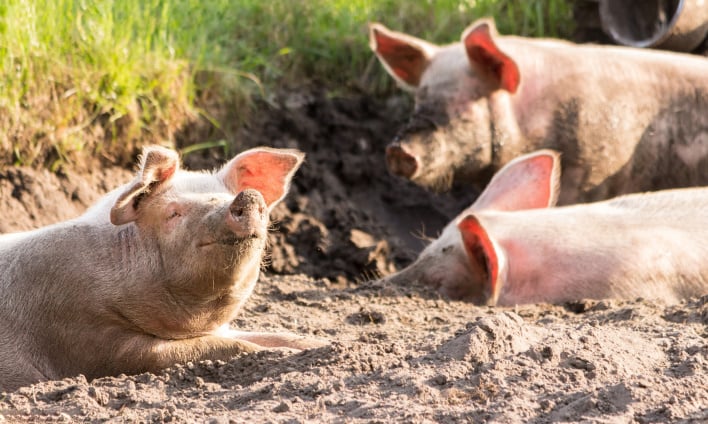 Somewhere between Babe and Elon Musk’s Neuralink experiments are pigs playing video games for science. Though it may sound bizarre, researchers Candace Croney and Sarah Boysen wanted to better understand the cognitive ability of pigs, through training and manipulating a joystick-operated video game task. This training and subsequent research has since led to some interesting results.


Over the years, it has been found that pigs are relatively smart animals, and it has become something of common knowledge. While the humane treatment of farm animals in an effort to gauge intelligence may raise ethical concerns, this new research is simply interesting to dig into. For the experiment, the subjects were two Yorkshire pigs and two Panepinto micro pigs trained with treats to manipulate a joystick using their snout. The hardware used for this experiment was a flight stick modified with a gear shift knob while connected to an IBM 386 personal computer.

After they successfully learned to manipulate the joystick, the trainers then taught the pigs to play a simple video game with the goal of moving a cursor to bump into a virtual target-wall. After four months, the micro pigs “were completing a disproportionate number of four- and three-walled targets during sessions and were therefore making little progress on two- and one-walled targets. To correct this, the pigs were now required to complete a minimum of 15 two- and one-walled targets during.” By this point, the researchers sadly eliminated the Yorkshire pigs from the experiment due to their size.

Overall, though there were some stumbling blocks with the results, the researchers reported that a decent level of success was reached “on a task that was significantly outside their normal frame of reference in itself remarkable, and indicative of their behavioral and cognitive flexibility.” They also found that while treats were important, so too was the trainer's interaction with the pigs, which provided encouragement.

Ultimately, the research completed is fascinating and opens new pathways into understanding a pig's cognitive abilities and could be interesting to study paired with Neuralink in pigs in the future. In any case, let us know what you think of pigs playing video games in the comments below.