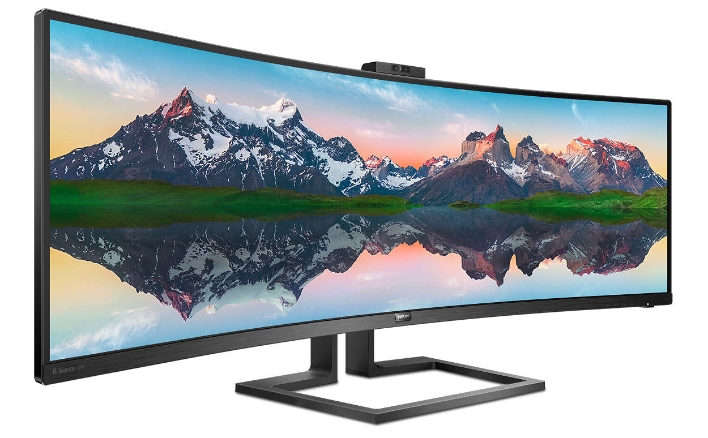 Following in the footsteps of the 49-inch Brilliance 499P9H, Philips has announced a new SuperWide monitor. The latest is the Brilliance 439P9H, which is a massive 43-inch panel with a gentle 1800R curve.

The SuperWide display (32:10) has a resolution of 3840x1200, which could easily allow you to replace two lower-resolution displays on your desk, and cut down on the rat’s nest of cables lurking around your work area. In this instance, it would be like having a pair of 1920x1200 panels at your disposal.

The 439P9H's VA panel is VESA-certified for DisplayHDR 400 compliance (over HDMI and DisplayPort), has a 450 cd/m² brightness rating, a 4ms (gray to gray) response time, 100Hz refresh rate, and support for AMD FreeSync. Philips also quotes NTSC coverage of 105 percent, sRGB coverage of 123 percent, and Adobe RGB coverage of 91 percent.

The 439P9H is also quite feature-packed when it comes to port selection, with an HDMI port and two DisplayPort connections. There's also a built in USB-C docking station, where you'll find two USB-C ports, along with three USB-A ports. There's even a GbE connection available as well.

If that wasn't enough, there's an integrated MultiClient KVM switch allowing you to control two different PCs with a single set of inputs (keyboard/mouse) and pop-up webcam that supports Windows Hello authentication.

The Philips 439P9H is already available in the European market and is expected to bow here in the United States shortly. In Europe, it's priced at €979, so we're expecting sub $900 pricing here.