PCI-SIG (Peripheral Component Interconnect Special Interest Group), the standards body responsible for overseeing the development of the PCI Express specification, announced that PCIe 7.0 is on track to bring another huge jump in bandwidth by 2025. As such, we could see solid state drives (SSDs) scale to around 64GB/s within the next few years.
There are other pieces that need to come together for that to happen, and then there's the question of how such a speed gain in storage would actually benefit end users. More on that in a moment. First, however, let's look at the PCIe 7.0 specification and what feature goals have been put in place.
The PCIe 7.0 specification will deliver a 128 GT/s raw bit rate and up to 512 GB/s of bi-directional bandwidth in a x16 configuration. As always, that's a theoretical maximum that doesn't take into account overhead. 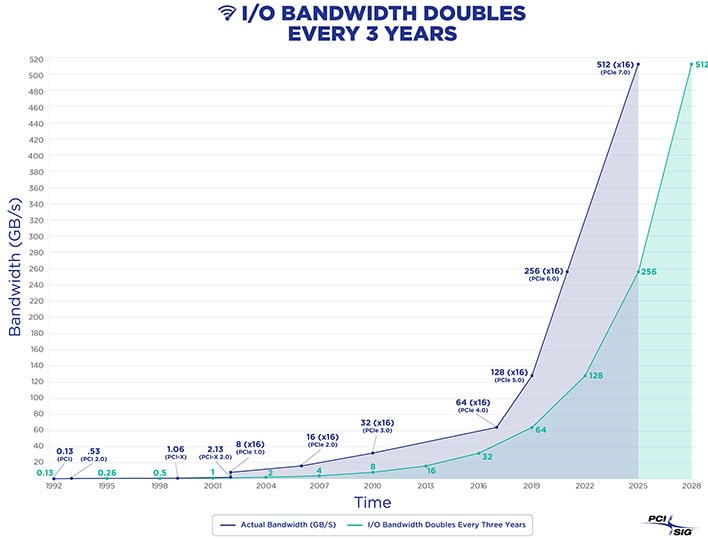 It's also yet another doubling of bandwidth, as PCI-SIG has been able to accomplish with each major upgrade to the PCIe protocol. Those consistent gains ensure that high-speed devices like cutting edge storage and graphics cards don't end up starved for bandwidth. That has not been an issue in a very long time, and it doesn't look like it will be for the foreseeable future.
"For 30 years the guiding principle of PCI-SIG has been, ‘If we build it, they will come,’" observed Nathan Brookwood, Research Fellow at Insight 64. "Early parallel versions of PCI technology accommodated speeds of hundreds of megabytes/second, well matched to the graphics, storage and networking demands of the 1990s. In 2003, PCI-SIG evolved to a serial design that supported speeds of gigabytes/second to accommodate faster solid-state disks and 100MbE Ethernet. Almost like clockwork, PCI-SIG has doubled PCIe specification bandwidth every three years to meet the challenges of emerging applications and markets."
Indeed, the PCI-SIG builds the standard and then the products come into view. Hence we're confident SSD makers will tout ridiculously fast drives when PCIe 7.0 takes hold of the market. That's going to take a little bit, as we've barely stepped foot into PCIe 5.0 territory. let alone PCIe 6.0. 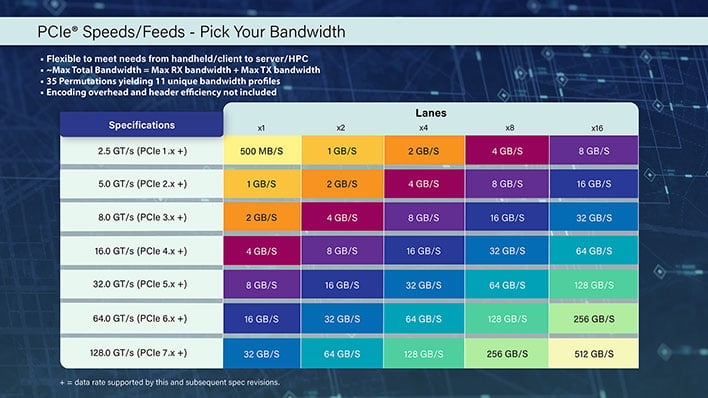 You can use the chart above as a cheat sheet, though note that it lists bi-directional bandwidth. So for future NVMe drives that operate on a x4 highway, you can refer to the x4 column an cut those values in half. Where things currently stand is that the fastest PCIe 4.0 SSDs push speeds in the neighborhood of 7.4 GB/s, coming relatively close to the 8 GB/s ceiling.
We're also starting to see PCIe 5.0 SSDs either in development or even released. Apacer, for example, recent showcased a couple of PCIe 5.0 SSDs rated to deliver up to 13 GB/s of sequential read performance, versus the theoretical maximum of 16 GB/s.
Without factoring in headroom, eventually PCIe 7.0 models would have 64 GB/s of bandwidth at their disposal. That wouldn't be of much benefit to the average consumer today, but there are a couple of things to keep in mind. One is that tools are finally in place to start taking advantage of faster speeds in games, such as Microsoft's DirectStorage API. And secondly, it never hurts to put the technology in place and then leave it up to hardware and software makers to catch up, rather than the other way around. Plus in this case, we're looking at a spec that is still three years in the future, and even longer before platforms implement it.
Outside of the consumer realm, PCI-SIG said the PCIe 7.0 spec is targeted to support emerging applications such as 800 G Ethernet, artificial intelligence and machine learning workloads, cloud computing, quantum computing, and data intensive markets.