PCI Express 6.0 Spec Finalized With A Huge Leap In Bandwidth For Next-Gen SSDs And GPUs

When it comes to the march of technology, the advancements never stop coming. Hence why even though the first consumer platforms supporting PCI Express 5.0 only recently launched, there's already talk of the next iteration, PCI Express 6.0. More than just talk, actually. PCI-SIG, the consortium responsible for overseeing the PCI Express standard, announced the final specifications for PCIe 6.0.
The highlight, of course, is another big jump in bandwidth. It doubles with each generational upgrade, and PCIe 6.0 keeps that trend going with a 64 giga transfers per second (GT/s) raw data rate, which works out to around 256 gigabytes per second (GB/s) over a 16-lane (x16) configuration. So that amounts to 128GB/s in each direction. 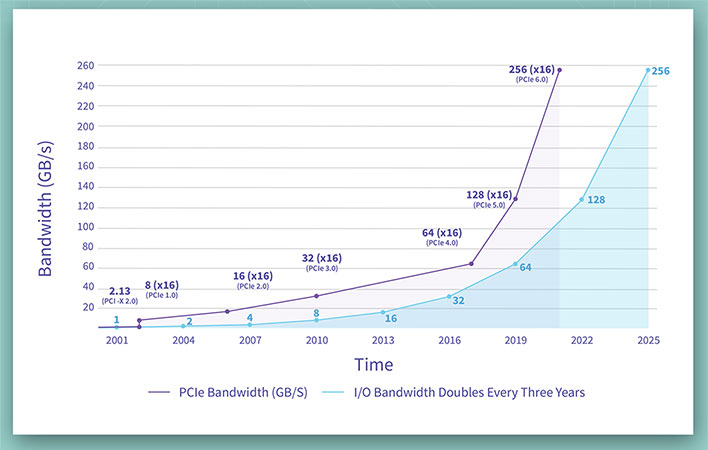 PCI-SIG and its members aim to double the input-output (I/O) bandwidth of the PCIe specification every three years. It doesn't always work out that way (note the time between PCIe 3.0 and PCIe 4.0), but the consortium's overall track record has been fairly consistent, as outlined in the chart above. Sometimes it even happens a little faster, as is the case now.
"PCI-SIG is pleased to announce the release of the PCIe 6.0 specification less than three years after the PCIe 5.0 specification," said Al Yanes, PCI-SIG Chairperson and President. "PCIe 6.0 technology is the cost-effective and scalable interconnect solution that will continue to impact data-intensive markets like data center, artificial intelligence/machine learning, HPC, automotive, IoT, and military/aerospace, while also protecting industry investments by maintaining backwards compatibility with all previous generations of PCIe technology."
To help arrive at 256GB/s, the PCIe 6.0 spec leverages four levels of Pulse Amplitude Modulation signaling, otherwise known as PAM4. It also features new and updated goodies like Flit (flow control unit) based encoding with support for PAM4, and Forward Error Correct (FEC) and Cyclic Redundancy Check (CRC) to mitigate the bit error rate increase that is associated with PAM4.
All that said, consumers need not fret about adopting a PCIe 5.0 or even a PCIe 4.0 platform now that a next-gen spec is officially out. For the most part, even the bandwidth provided by PCIe 4.0 is not being fully realized in real-world workloads. The PCI Express isn't really a bottleneck for graphics (for gaming), and the fastest PCIe 4.0 solid state drives top 7,000MB/s, which is incredibly fast.
On top of that, it will take some time for AMD and Intel to embrace the spec in the consumer sector. As things stand, only Alder Lake supports PCIe 5.0 on the desktop, and AMD will follow suit when it releases Zen 4 later this year.

Still, it's important to keep driving the industry forward, and that is what PCI-SIG is doing. Servers will benefit before consumers, but eventually we can expect both AMD and Intel to release platforms that support PCIe 6.0. By then, it's conceivable that storage and GPU makers, as well as developers, will be in a better position to leverage all that bandwidth.