PC Shipment Forecast Is All Gloom And Doom But Is The Sky Really Falling?

Every so often, market research firms make gloomy forecasts that put even the most cynical weatherpersons to shame. This really came to a head when tablets started to make a run at the market—it was the end of the PC as we knew it! The PC survived (especially PC gaming), of course, and it will make it through 2022 despite shipments being on pace to decline by nearly double digits.
This time it's Gartner that is sharing the sobering forecast. According to the firm, worldwide PC shipments are on track to drop by 9.5 percent in 2022, marking the steepest decline of all device segments this year. The reason? There isn't a single one, but a confluence of factors.
"A perfect storm of geopolitics upheaval, high inflation, currency fluctuations and supply chain disruptions have lowered business and consumer demand for devices across the world and is set to impact the PC market the hardest in 2022," said Ranjit Atwal, senior director analyst at Gartner. "Consumer PC demand is on pace to decline 13.1% in 2022 and will plummet much faster than business PC demand, which is expected to decline 7.2% year over year." 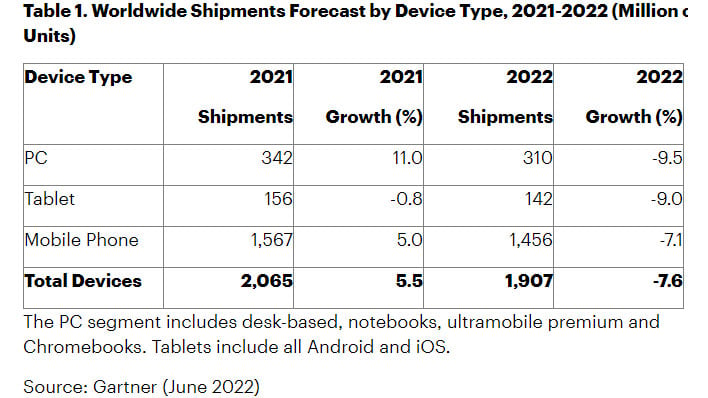 Other device categories are not immune to the bleak forecast, either. According to Gartner, tablet shipments (once deemed the PC killer) will see a similarly steep decline dropping 9 percent in 2022, while smartphone shipments will tumble 7.1 percent this year.
We'll have to wait and see if this all plays out, but we can't help to wonder if part of the projected slowdown is for a reason not mentioned—new CPU and GPU launches on the horizon. Back in May, we wrote about desktop CPU sales suffering the biggest quarterly decline in history. When we reached out to Falcon Northwest, the boutique builder told us that an influx of early rumors about next-gen products had played a roll.
"To read many of the [mainstream] headlines you’d think new GPUs would be any day now. But while I don’t know much more about the schedules and can’t say what I do know, I fear this false narrative that the next generation is almost here is going to depress high-end component sales for far longer than anyone would like," Falcon Northwest founder and CEO Kelt Reeves said at the time.
He also pointed to "global economic conditions, war, inflation, high component costs, and a stock crash" as contributing factors for the decline in CPU sales.
To his point, we've reported on several rumors throughout the year just like so many other sites. Now that we're well into the summer season, those upcoming launches (Raptor Lake, Zen 4, RDNA 3, and Ada Lovelace) are much closer than they were several months ago. And so it's feasible that buyers are putting off making purchases until the new hardware rolls out.
In any event, we're not too concerned with a drop in PC shipments, even if they decline steeper than other device categories. We're still talking about a whole lot of PCs—Gartner forecasts 310 million PC shipments for the entirety of 2022.