In late April, research firm TrendForce sounded alarm bells when it projected that soaring PC demand would mean bad news for PC DRAM prices. At the time, the company showed PC DRAM prices increases of 23 to 28 percent during Q2 2021, with an increase in the average selling price (ASP) jumping by as much as 23 percent.

However, the firm is singing a different turn for its Q3 2021 projections. It now forecasts that PC DRAM prices will only increase by 3 to 8 percent quarter-over-quarter. According to TrendForce, “most of these brands are still carrying about 8-10 weeks’ worth of PC DRAM inventory,” which accounts for the smaller price increase for Q3.

We should note that PC DRAM is still supply constrained due to hefty allocations for the lucrative server market. Memory suppliers are pivoting to fully address that market, which is projected to see an upward pricing movement of 5 to 10 percent for Q3 2021. 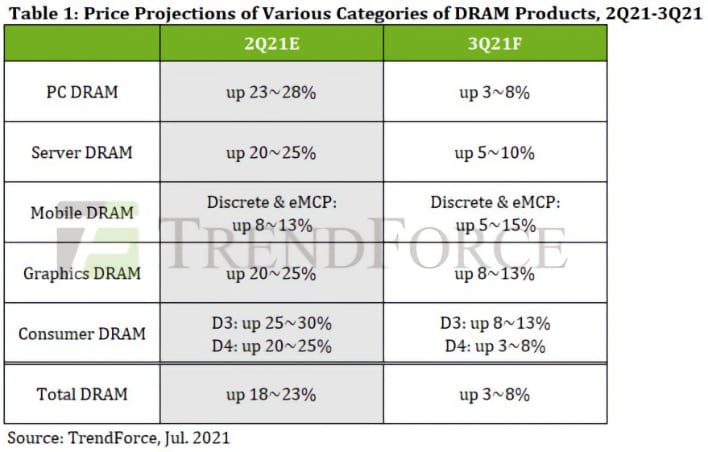 “Some Tier 2 clients will continue to procure server DRAM in 3Q21 since they did not sufficiently stock up in the prior quarters,” it writes concerning increasing server DRAM prices. “With regards to supply, the three major DRAM suppliers (Samsung, SK Hynix, and Micron) are limited by the fact they are currently carrying a relatively low inventory of server DRAM.”

While we expect to see smaller price increases across PC DRAM, server DRAM, and graphics DRAM segments, mobile DRAM is expected to buck that trend. Q2 saw upwards of a 13 percent price increase, but Q3 could see that figure top out at 15 percent. You can blame constrained supplies in the smartphone sector for this trend.

“Samsung will increase its mobile DRAM prices to a more notable extent compared to its US competitors,” the research firm continued. “Going forward, Samsung’s price hike will lead its competitors to retool their pricing strategies, subsequently leading to an even wider price increase across the entire mobile DRAM market.”

What does this mean for consumers moving into the latter half of 2021? Unfortunately, memory prices are still increasing, albeit not as sharply as in previous quarters. However, we should expect to see memory supplies stabilize during Q4, which could help level out price hikes as we enter 2022.