PAX East is chock full of dazzling sights and sounds. One of the crown jewels was a series of custom-built PCs showcased by Gigabyte's Aorus sub-brand. The seven systems were designed and built by either an enthusiast community member or a professional modder. Aorus contributed parts but otherwise allowed the creators to execute on their vision.

We caught up with one of the builders, Kevin Tabor from Mod My Mods, who gave us an overview of each of the systems. The builds span a wide range of stylings. There are a couple systems with minuscule footprints and others in massive towers. One system uses the aggressive stylings of the Cougar Conquer chassis while others float free in open air frames. The only way to do them justice outside of an in-person visit is to check out the video below.


The Braintech Mods system, Cosmic, is a fully fleshed out system featuring custom liquid cooling using ThermalTake hardware and fantastic looking braided cables. Even the GPU is squirreled away thanks to a PCIe extension cable.

Jason and Ismael at KillR Modz left their mark with a couple systems- the tiny Node.Aorus and another built right on the show floor before PAX opened. Jason designed the Node.Aorus system to highlight Aorus AIO cooling with a wild open-air frame custom built by Ismael. Ismael also did the heavy lifting for the other system with contributions from Jason and Triston.

Andre of Oracle Mods crafted another intriguing small formfactor system. Its size did not seem to limit Andre. Hard line tubing and braided cables snaked their way all through the system.

Triston Mitchell seemed to be working overtime with two builds of his own. He built the Final Fantasy system and another using a custom painted and modified Cougar Conquer chassis. The Final Fantasy system shows off the Aorus Xtreme’s overlapping RGB fans with a vertical GPU mount. The Cougar Conquer build has been an ongoing passion project for Tristan. It features the Aorus Z390 Waterforce motherboard and a lot of custom work to every aspect of the system. 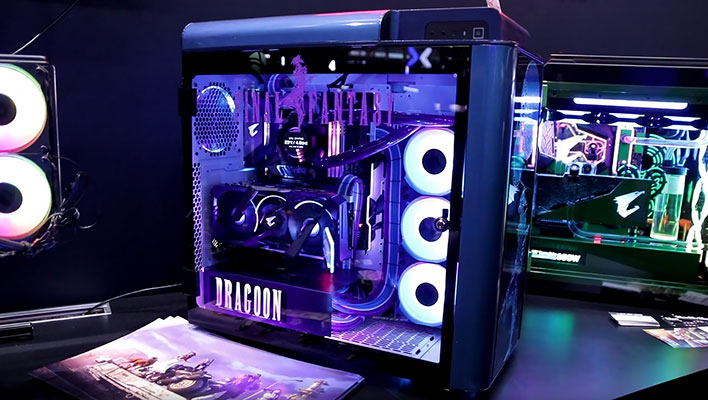 Mod My Mods had their Green Machine build on display with Gigabyte Aorus. The Green Machine features a powder coated paint job on the GPU, RAM, and case. While green is certainly the predominant color, the build also uses RGB lighting to accent the system with purples and oranges that really help it pop.

Mod My Mods also had a few other systems at different booths. We were able to get a shot of #TreeOfWife on display at the EVGA booth. #TreeOfWife is another impressive build in a tiny chassis. Mod My Mods utilized a mITX motherboard and vertical GPU alignment to squeeze in an EVGA RTX 2080 Hydro Copper into the 22-liter Jonsbo VR1 case. 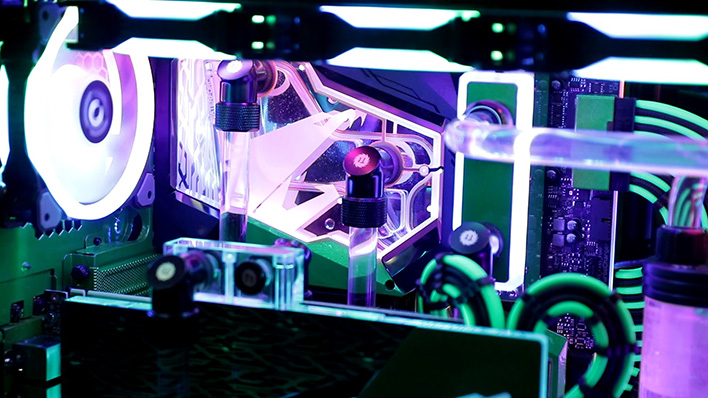 Through the interview, Kevin stressed how accessible custom PC building can be. People can put together cookie cutter systems like Legos, but he encourages everyone to take the extra step and make the build their own. The important part is to try it. Whether you want a turnkey AIO cooler to want to branch out into custom open loops and sleeved cables, the goal is to have fun and share your progress with the community.