OnePlus fans are frothing in anticipation of the new, affordable OnePlus Nord Android phone that is set to launch July 21. Some new details on the smartphone have been shared on the OnePlus forums that come from OnePlus representative Shawn L, Head of Product for Nord. In the post, he shares information on the smartphone and the work that has gone into its design.

He promises that the Nord offers the fast and smooth experience that OnePlus fans are used to. The smartphone will feature a 180 Hz sampling rate display mode for specific tasks, such as gaming, while the standard refresh rate will be 90 Hz. Nord will employ a Qualcomm Snapdragon 765G 5G SoC under the hood, backed by 12 GB of RAM. There's no mention of storage space. We would expect plenty of storage, likely starting at 128 GB  and scaling up from there.

Shawn L also mentions in his post that Nord will feature Google Comms Suite integration, becoming the first OnePlus smartphone to come with Messages, Phone, and Duo out of the box. The use of Google software was also confirmed separately via a OnePlus Instagram post with a short video highlighting the inclusion of Google's software. 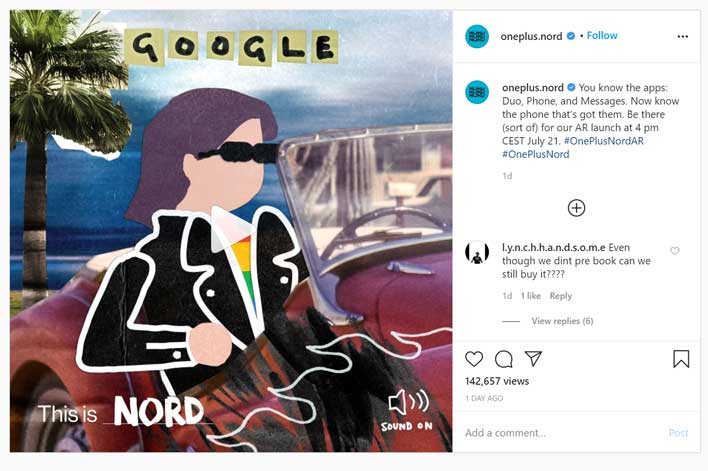 Another post about Nord from OnePlus Imaging Director Simon Liu was published on the forum. He confirmed the Nord would feature six total cameras with four on the back and two on the front. The rear cameras will feature a 48MP Sony IMX586 sensor, an 8MP ultra wide-angle sensor, a 5MP depth sensor, and a macro sensor. The front selfie camera is a 32MP unit, and there is an additional ultra-wide-angle sensor upfront.

The primary rear sensor will feature optical image stabilization and software enhancements to make it "incredible" to use. The front wide-angle sensor has a 105-degree field of view to fit more people into an image. Other details about the OnePlus Nord surfaced earlier this month when the device was revealed on video. Pricing for the smartphone is expected to be under $500.