OnePlus today confirmed that one of its long-held practices regarding its smartphones won’t continue for 2021. As has typically been the case with OnePlus, it launches a new flagship smartphone during the first half of the year, then follows up with an enhanced “T” version during the second half. We’ve seen in recent years this with the OnePlus 6/6T, OnePlus 7/7T, and the OnePlus 8/8T.

However, the company says that there won’t be a OnePlus 9T follow-up for the OnePlus 9. This is effectively the latest fallout from the integration of OnePlus with another BBK Electronics subsidiary, Oppo.

With all the changes that are happening, OnePlus founder Pete Lau posted a blog this morning describing what he calls OnePlus 2.0. “I would like to say that OnePlus has entered the OnePlus 2.0 phase,” said Lau. “I believe we are now a more mature and reliable technology brand that continues to bring top-quality products to users around the world with the same Never Settle spirit as before.”

On the hardware front, Lau explains that its affordable devices like the entry-level Nord series will become “more localized,” i.e., appealing to developing markets like India. However, its premium and ultra-premium ($500+) smartphones will continue to be available globally. 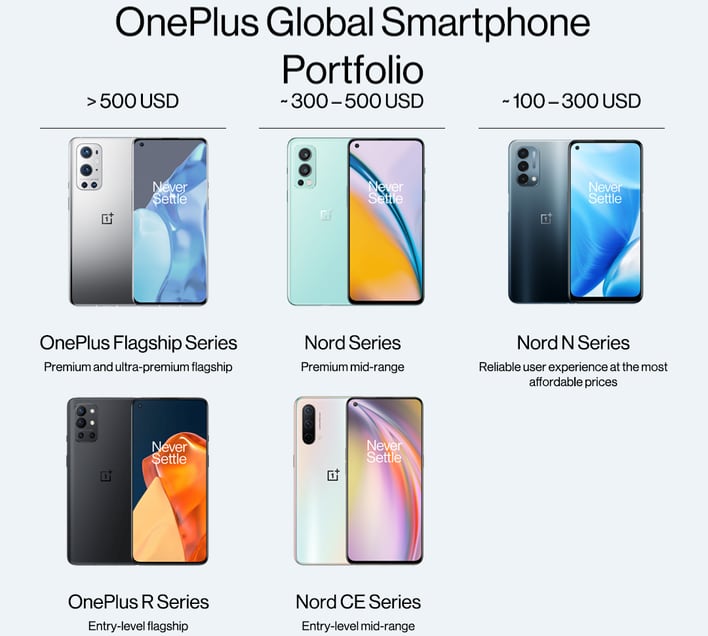 Going forward, the codebase that underpins OxygenOS and Oppo’s ColorOS will merge as the companies consolidate software development. “With the codebase integration, OxygenOS 12 build quality has been improving and software updates are becoming more timely,” added Lau. “By combining our software resources to focus on one unified and upgraded operating system for both OnePlus and OPPO devices globally, we will combine the strengths from both into one even more powerful OS: the fast and smooth, burdenless experience of OxygenOS, and the stability and rich features of ColorOS.”

While we won’t see a OnePlus 9T debut this year, Lau confirms that its next-generation flagship smartphones will come in 2022 (likely during the first quarter). The launch of these new flagships, likely called the OnePlus 10/OnePlus 10 Pro, will also be the first to arrive with the unified Android OS combining bits from OxygenOS and ColorOS. In addition, OnePlus is committed to providing a roadmap for which existing devices will receive updates to the unified OS in the coming months.

“I have faith that the next step of the OnePlus journey – OnePlus 2.0 – will be a positive change for us as a brand, but also for each of you as users and tech lovers,” Lau concluded.