When the OnePlus 9 and OnePlus 9 Pro were first announced last week, it was confirmed that the smartphones would support 4G LTE across all three major U.S. networks: AT&T, Verizon, and T-Mobile. However, when it came to 5G support, things were definitely more limited.

When announced, the OnePlus 9 and OnePlus 9 Pro only supported 5G connectivity on T-Mobile. At the time, OnePlus said that 5G support on Verizon's wireless network would be coming at a later date. Well, Verizon announced late last week that both smartphones are now certified to work on its "Nationwide 5G" network. Nationwide 5G in Verizon parlance refers to its sub-6GHz 5G network, in case you were wondering.

Since I’m getting a ton of questions. The @OnePlus 9 is certified for @Verizon 5G Nationwide and 4G LTE. The OnePlus 9 Pro brings 5G Ultra Wideband to the party. The OP8 Pro was one of my favorite phones of 2020 and I can’t wait to get my hands on an OP9 Pro. pic.twitter.com/PkYtFsOst7

However, things diverge when we talk about Verizon's "5G Ultra-Wideband" (mmWave) network. If you recall, the standard OnePlus 9 doesn't have the hardware to support 5G mmWave connectivity, while the OnePlus 9 Pro does. So, if you want to access the highest 5G speeds that Verizon makes available to customers, you'll have to pay for the OnePlus 9 Pro, which is $1,069 in a 256GB configuration.

We reviewed the OnePlus 9 and OnePlus 9 Pro last week and found them both to offer great displays, snappy overall performance, and good photo quality. The OnePlus 9 Pro impressed us, particularly with its 65W wired charging via its USB-C port and 50W wireless charging.

**Updated 4/1/2021 @ 5:50pm**
We were able to get a Verizon SIM to slap in our OnePlus 9 Pro review unit, and as expected, the speeds incredible. The top two results are using Verizon's mmWave network, while the bottom result is Verizon's 4G LTE network while standing in the exact same spot. 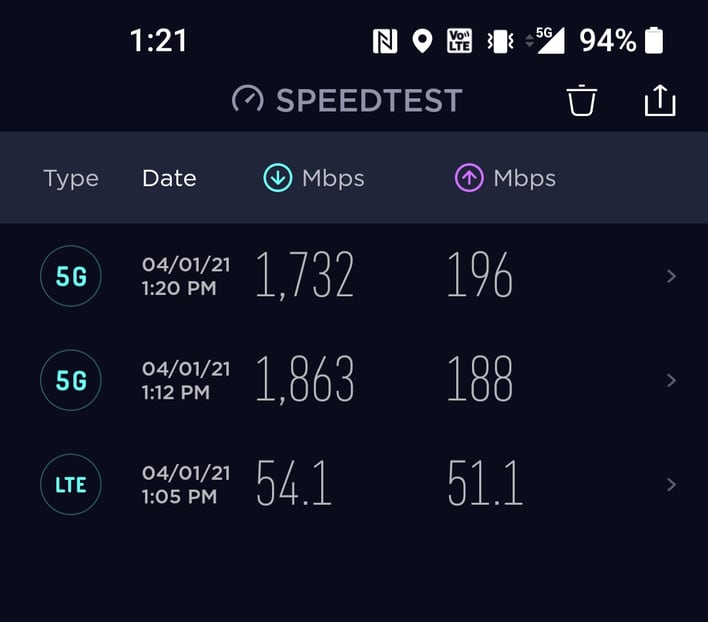