Things have been relatively quiet on the OnePlus 9 leak front for the past few weeks. However, we're getting our best look yet at the upcoming flagship OnePlus 9 Pro, if these latest images are indeed accurate.

YouTuber Dave2D claims to have obtained images of the upcoming OnePlus 9 Pro from an anonymous source, and it's quite an interesting device. The first thing that pops into focus is the rear camera pod, which features Hasselblad branding. Hasselblad is well-known for its high-end professional cameras, and it on occasion lends its expertise to "lesser" consumer electronics devices.

The camera systems on previous OnePlus smartphones have been competent, but usually aren't at the top of the class with regards to color reproduction, image quality, and low-light performance. However, this rumored collaboration with Hasselblad could bring some key camera performance improvements that would make it more competitive with the likes of Samsung and Apple in this space. Speaking of the camera, there are four sensors on the back, which is up from the three that we've seen on previous leaks of the standard OnePlus 9.

Unlike the other leaked OnePlus 9 photos that we've seen, the OnePlus 9 Pro pictured here appears to feature a display that subtly curves downward around the edges. When it comes to the display, we're looking at a maximum resolution of 3120x1440, but users can switch to an FHD+ mode (2340x1080) for lower power consumption. As for refresh modes, you can choose from the standard 60Hz, or switch to faster 120Hz at the expense of battery life. We can also see OnePlus' venerable alerts slider on the side of the device above the power button. 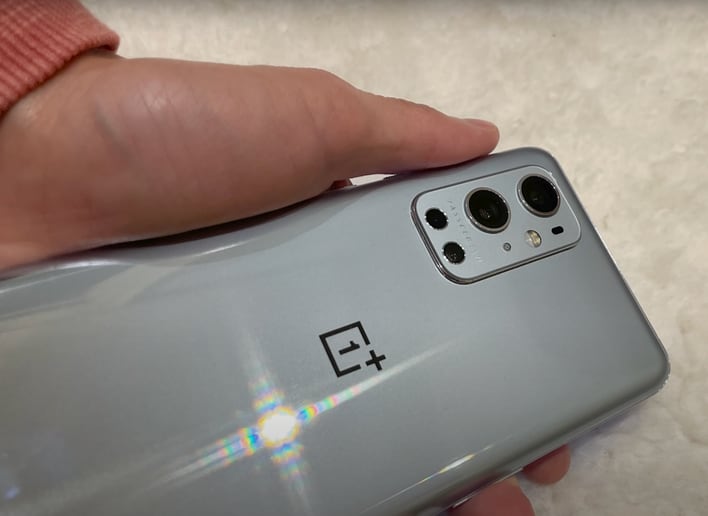 The prototype OnePlus 9 Pro device leaked here is showing 12GB of RAM and 256GB of internal storage. The smartphone is expected to feature Qualcomm's new Snapdragon 888, which is the company's first flagship SOC with an integrated 5G modem (in this case, the Snapdragon X60).