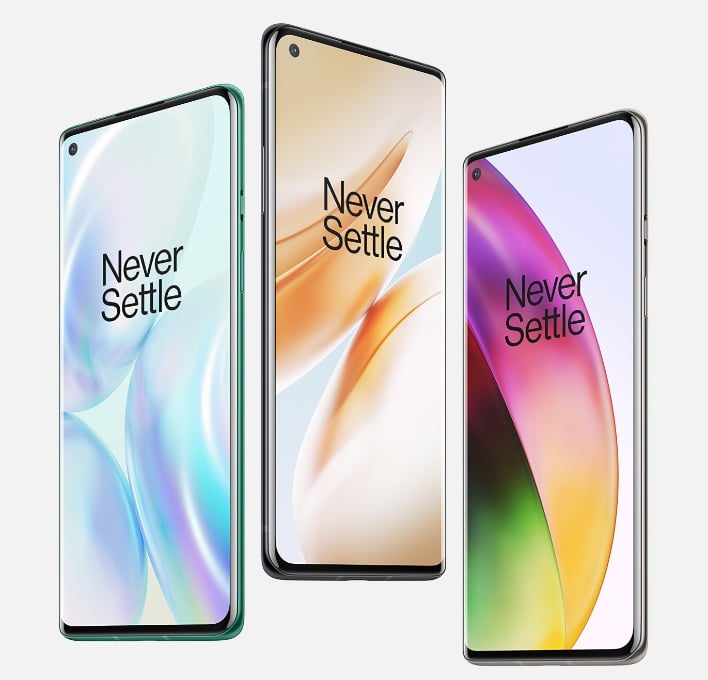 OnePlus announced its new 8-Series smartphones earlier this month, and they look quite compelling from the images we’ve seen and the specs on paper. Although you'll have to wait for our full review for overall impressions on the devices, those that want to jump feet first into the OnePlus 8 and OnePlus 8 Pro can do so starting on Wednesday morning.

T-Mobile in particular has announced a rather hot deal on the OnePlus 8, which has an MSRP of $699 for an 8GB/128GB configuration, or $799 for the 12GB/256GB configuration. The wireless carrier will sell the OnePlus 8 for half-off ($349) if you add a line or trade in an eligible smartphone. What’s even better is that T-Mobile is not discriminating with this offer -- it's available for both new and existing customers.

If you purchase the OnePlus 8 from T-Mobile, you'll get the 8GB/128GB configuration in either Onyx Black or Interstellar Glow. If you'd rather pay full price for the smartphone with the carrier for whatever reason, you can get if for $0 down and $29.17/month for 24 months.

The OnePlus 8 is powered by Qualcomm's new Snapdragon 865 SoC and brings 5G connectivity courtesy of a discrete Snapdragon X55 modem. It has a 6.55-inch 90Hz FHD+, triple rear cameras, a hole punch cut-out for the display, and a 4,300 mAh battery with Warp Charge capabilities.

At this time, it doesn't appear that T-Mobile has plans to sell the flagship OnePlus 8 Pro, which is priced from $899 (8GB/128GB). That smartphone can also be had in a 12GB/256GB configuration for $999, and brings a lot of other niceties including 30W wireless Warp Charging and a 6.78-inch 120Hz QHD+ display. Here's the link to the OnePlus page on T-Mobile for future reference, however.

For those that would prefer to purchase either the OnePlus 8 or OnePlus 8 Pro unlocked, they will also both be available from Amazon starting Wednesday. You can check this Amazon link on Wednesday to grab either smartphone.