New research indicates that one of Saturn's moons could hold evidence for habitability. The new findings suggest Enceladus's subsurface ocean could hold a key building block for life.

The search for life outside of our own planet has been heating up with new data obtained more and more often. But it is not always the latest data obtained that is exciting researchers. The Cassini spacecraft ended its observation of Saturn in 2017, as it dove into the planet's atmosphere. Since then, researchers have been studying the data collected by the spacecraft and finding new things to be excited about.

"Enceladus is one of the prime targets in humanity's search for life in our solar system," remarked Dr. Christopher Glein. "In the years since NASA's Cassini spacecraft visited the Saturn system, we have been repeatedly blown away by the discoveries made possible by the collected data." 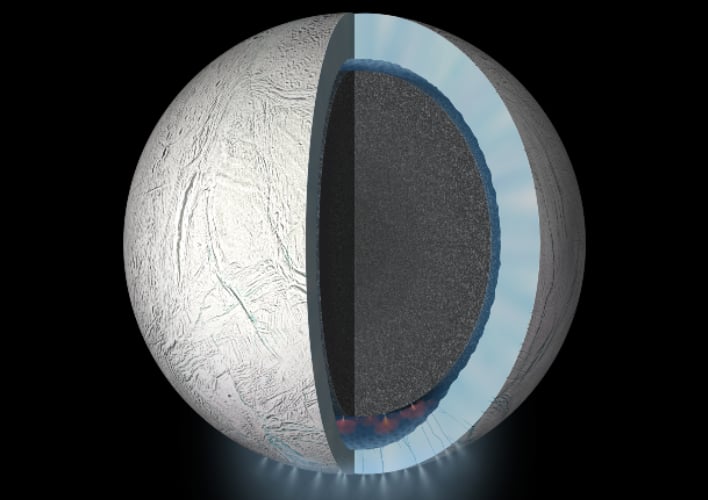 Cassini discovered Enceladus's subsurface liquid water and then analyzed samples as plumes of ice grains and water vapor ejected into space from cracks in the moon's icy surface.

Glein explained that they learned the plume contained all the basic requirements for life as we on Earth know it. While phosphorous has not yet been directly identified, Glein says that the team has discovered evidence for its availability in the ocean beneath the moon's surface.

The things that researchers search for in terms of life on other planets has shifted, explains Glein. They are now looking for the building blocks for life, which include organic molecules, ammonia, sulfur-bearing compounds, as well as the chemical energy that is necessary to support life. Previous work has suggested that phosphorous might be scarce in the oceans beneath Enceladus, which would in turn lessen the chances of life.

On Earth, phosphorous is needed for all life. It is a required component of DNA and RNA, energy-carrying molecules, cell membranes, as well as other essentials. 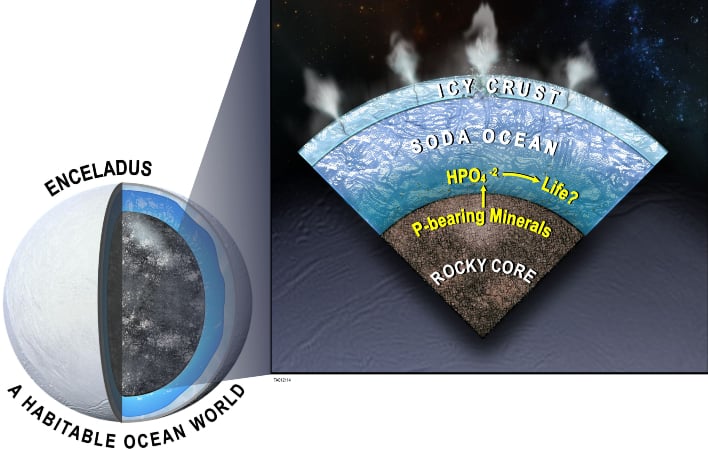 The team has been able to perform thermodynamic and kinetic modeling that simulates the geochemistry of phosphorous. During the research, the team has developed the most detailed geochemical model of how seafloor minerals dissolve into the Enceladus's ocean. In doing so, they have been able to predict that phosphate minerals would be unusually soluble there.

"The underlying geochemistry has an elegant simplicity that makes the presence of dissolved phosphorous inevitable, reaching levels close to or even higher than those in modern Earth seawater," Glein stated. "What this means for astrobiology is that we can be more confident than before that the ocean of Enceladus is habitable."

Glein says that the next logical step is to return to Enceladus in order to see if a habitable ocean actually holds life. You can read more about the research by reading, "Abundant phosphorous expected for possible life in Enceladus's ocean," the peer-reviewed paper on PNAS.