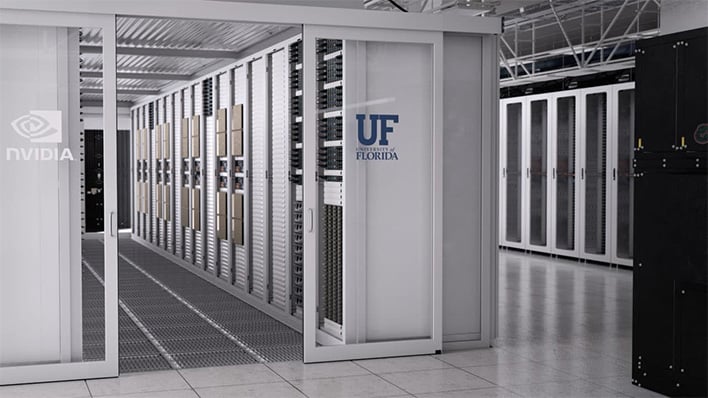 NVIDIA has partnered with the University of Florida (UF) to build an artificial intelligence (AI) supercomputer that will be the fastest in all of academia. Or more specifically, it will be capable of a whopping 700 petaflops of AI performance, made possible by enhancing the university's existing HiPerGator supercomputer with NVIDIA's DGX SuperPod architecture.
This essentially represents an infusion of NVIDIA's DGX A100 systems, each of which wields eight Tensor Core GPUs based on the company's 7-nanometer Ampere architecture. And each of those GPUs touts 54 billion transistors capable of delivering 5 petaflops of performance in a single node, along with the ability to handle 1.5TB of data per second. In total, UF will receive 140 DGX A100 systems, which works out to 1,120 A100 Tensor Core GPUs.

Bolstered by a big boost in AI supercomputing power, UF anticipates creating 30,000 AI-enabled graduates by 2030.
"This is going to be a tremendous partnership," Florida Gov. Ron DeSantis said. "As we look to keep our best talent in state, this will be a significant carrot, you’ll also see people around the country want to come to Florida."

Perhaps the best part for the university is that it is not spending any money to upgrade its supercomputer. Instead, the effort is a result of a $50 million gift, split evenly between a $25 million donation from NVIDIA co-founder and UF alumnus Chris Malachowsky, and NVIDIA providing $25 million in hardware, training, and services to make this happen.
"The partnership here with the UF, the state of Florida, and NVIDIA, anchored by Chris’ generous donation, goes beyond just money," said NVIDIA CEO Jensen Huang. "We are excited to contribute NVIDIA’s expertise to work together to make UF a national leader in AI and help address not only the region’s, but the nation’s challenges."
UF president Kent Fuchs is hopeful of the school becoming the first AI university. With the new hardware and capabilities in place, the supercomputer will be used to research COVID-19, support agriculture, address the needs of an aging population, manage the effects of sea levels, and various other tasks that require oodles of computing power.