It has been a little over a year since NVIDIA introduced Reflex alongside its GeForce RTX 30 series. Reflex is essentially a suite of GPU, display, and software technologies designed to help lower end-to-end system latency and enable accurate measurements of system latency without expensive equipment. However, the benefits of Reflex are hard to quantify without experiencing it for yourself. To help you do that and see what all the fuss is about, NVIDIA has created the System Latency Challenge, a fun contest that highlights what kind of difference lower latency can make in your gaming skills, bolstered by some sweet prizes. More on those in a moment.

We tested NVIDIA Reflex last year with a set of fully compatible gear and peripherals, including an ASUS ROG Swift PG259QNR gaming monitor with a blazing-fast 360Hz refresh rate, and an ASUS ROG Chakram Core mouse. Specialized gear is not required to leverage Reflex and its low latency modes, but they do offer extra amenities, such as support for Reflex Latency Analyzer, a system latency measurement tool to better assess the interaction between your various gaming hardware.
The other part of the equation is the Reflex SDK, a set of APIs for gamer developers to reduce and measure rendering latency. At present, Reflex is baked into more than two dozen games, with more supported titles on the way. Even without implicit support, however, NVIDIA's drivers offer Low Latency Mode options that will work in some games. 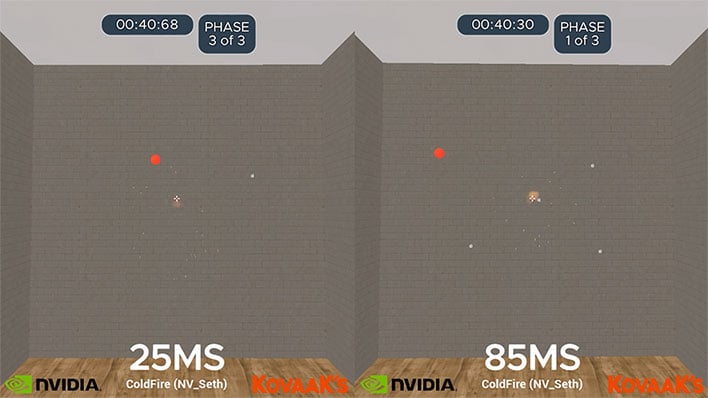 NVIDIA has been shouting from a mountaintop that lower latencies can improve your gaming skills, and has even published research on the topic. According to NVIDIA, poor responsiveness can be problematic even at higher frames per second, and it has figured out a fun way for gamers to see this for themselves in a quantifiable way. That's where the System Latency Challenge comes into play.
"With the NVIDIA System Latency Challenge, you will first-hand experience the effects of various system latencies and how they impact player aiming performance. With the top played games being competitive esports and the majority of GeForce gamers playing them, it’s no surprise developers are implementing NVIDIA Reflex into their games to lower system latency and help improve players’ competitive performance," NVIDIA says.
To make this possible, NVIDIA partnered with The Meta, developer of KovaaK 2.0, a popular aim trainer employed by esports professionals, streamers, and competitive gamers who want to hone their reaction times. The System Reflex Challenge calculates the amount of latency to simulate 25ms, 55ms, and 85ms of end-to-end system latency on a gaming PC.
"Latency is then added by injecting a delay within the latency pipeline that achieves the desired end to end latency level. Since Kovaak’s aim trainer is extremely light weight, nearly all systems can natively achieve sub-25ms latency. To know how much latency to inject, we take the target latency minus the measured latency to give us the amount of time we need to delay inputs," NVIDIA explains.
NVIDIA claims this is "fairly accurate," noting that the target is +/-5ms of the target latency level no matter what the system configuration. And if you own a Reflex Analyzer display, go ahead and turn on the Reflex Flash Indicator to measured your achieved latency during the challenge.

By the way, only your latency changes in the challenge; your FPS stays the same. In doing so, you are able to see just what kind of impact a lower latency has on your gaming performance, and specifically your aim. 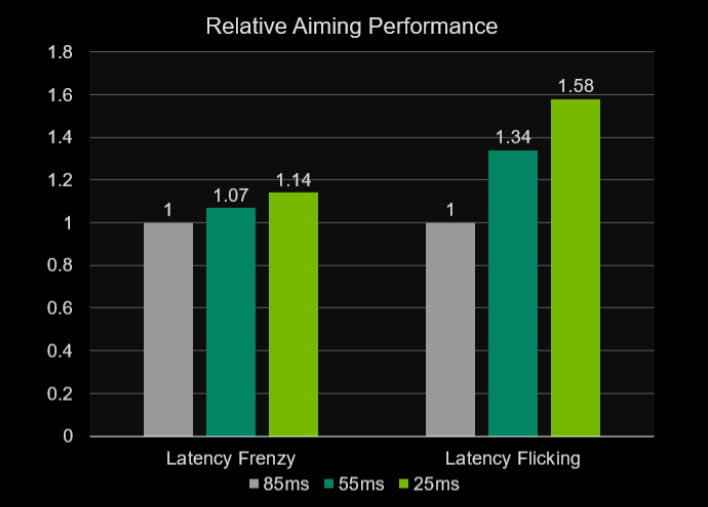 "Based on early results from our internal beta, players show up to a 58 percent increase in the number of targets destroyed within 45 seconds between 85ms and 25ms of system latency!," NVIDIA says.
The System Latency Challenge is free in KovaaK's through December 21, 2021. Only NVIDIA GPU owners can participate, though, as it requires a GeForce 900 series or newer GPU. There are two 'experiments' at each of the three latency settings: Latency Frenzy, in which you aim and shoot at red dots/targets as quick as you can, and Latency Flicking, whereby after you destroy a blue target, a small red target appears for 600ms. 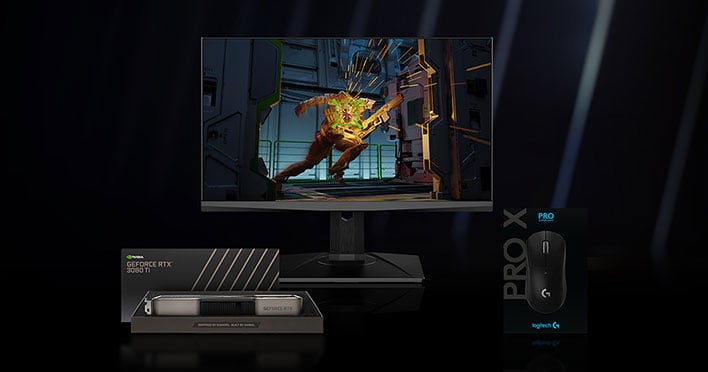 There are three prizes up for grabs...
NVIDIA is awarding nine of each for a total of 27 prizes. Each participant is eligible to win one after completing all phases of either the Latency Frenzy or Latency Flick Shot challenge. You don't necessarily have to obtain the highest score either—NVIDIA will randomly select 27 winners from the leaderboard. So, for example, a player who places 200th on the leaderboard will have the same chance of winning as a person who places 10th.
You might as well give it a shot if you've got the necessary hardware. The challenge doesn't take very long, it's entertaining, and you might just walk away with a nice prize for your efforts.