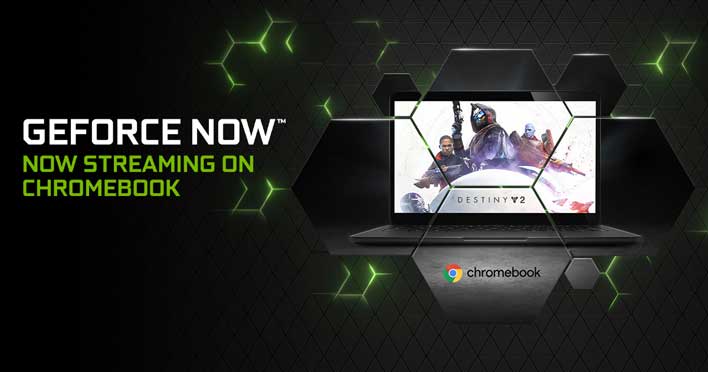 To get started, Chromebook owners will need to sign up for a free or paid Founders GeForce NOW membership. NVIDIA currently has a deal going on memberships with a six-month Founders membership for $24.95. The membership includes a Hyper Scape Season One Battle Pass token along with exclusive Hyper Scape in-game content.

Any Chromebook owner who signs up for GeForce NOW will want to connect a USB mouse to the Chromebook for gaming. NVIDIA's game streaming service coming to Chromebooks is great news as many people are currently using ChromeOS devices for distance learning and work thanks to their budget pricing. Being able to play high-end video games on the modestly powerful computers makes them more useful.

A Chromebook alone lacks the power to play most video games, and game support from developers for ChromeOS devices is lacking with many popular games. Another great feature of GeForce NOW is that members can play against each other no matter what platform they're on. That means a player on a high-end PC can play against a friend on a Chromebook or Android tablet.

Cross-platform play is enabled with the NVIDIA service thanks to all players playing the PC version of supported games purchased from digital stores like Steam, Epic Games Store, and Ubisoft Uplay. GeForce NOW currently supports more than 650 games, including 70 popular free-to-play titles. Recently Steam Game Sync was launched to allow gamers to sync games from their Steam library with their library on GeForce NOW. Steam Game Sync has become one of the service's most popular features. Chromebook users will gain support for Steam Game Sync soon.

Chromebook's are quickly becoming popular platforms for many computer users thanks to their affordability. In June, Google and parallels teamed up to make the Chromebook more useful by bringing Microsoft Office and Windows apps to Chromebooks.