Probably the worst kept secret in tech right now is the impending launch of the GeForce RTX 3080 Ti. Heck, even NVIDIA can hardly contain its excitement about adding "Ti" models to the stack (there's also a GeForce RTX 3070 Ti in the works, according to rumors), as it teased a formal announcement for May 31. We might already know the full specifications of one of the cards, though.
Previous leaks and rumors pegged the card as having 10,240 CUDA cores and 12GB of GDDR6X memory, and it seems those specifications are right on the money. We obviously will not know for sure until NVIDIA introduces the GeForce RTX 3080 Ti—Jensen Huang has been known to throw curve balls in the past—but at this late stage, specifications are likely set in stone.
So, what can we expect? Well, a validated GPU-Z entry reveals all the juicy details. Have a look... 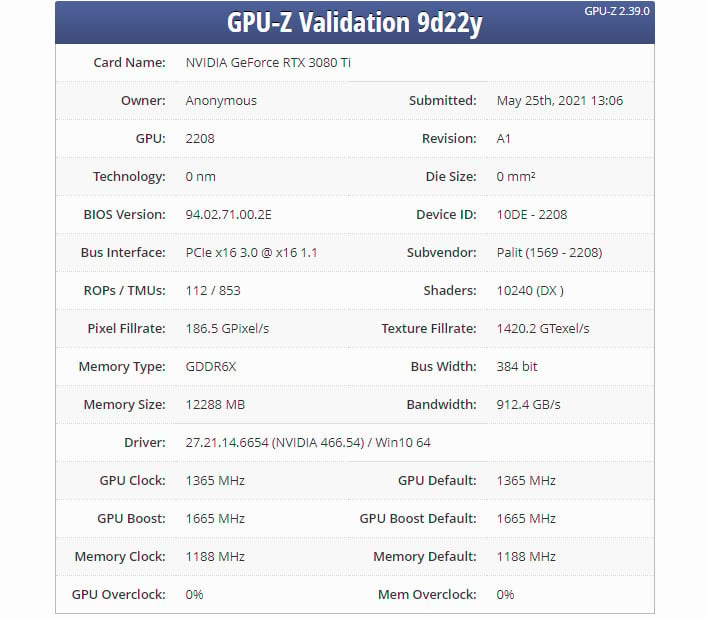 The GeForce RTX 3080 Ti GPU-Z listing highlights speeds and feeds obtained from a Palit-brand graphics card. In line with previous rumors, it shows the card as having 10,240 CUDA cores (or shaders) and 12GB of GDDR6X memory linked to a 384-bit memory bus, for 921.4GB/s of memory bandwidth. But that's not all it reveals.
GPU-Z is a fairly comprehensive utility. This card appears to be running at stock clocks, which entail a 1,365MHz base frequency and 1,665MHz boost clock. Put it all together and you have a 186.5 GPixel/s fillrate and 1,402.2 GTexel/s texture fillrate. We can also extrapolate the card's single-precision compute performance—34.1 TFLOPs, compared to the 35.6 TFLOPs for the GeForce RTX 3090.

Additionally, the GPU-Z entry indicates the GeForce RTX 3080 Ti will have 112 render output units and 853 texture mapping units.
We don't get a look at the number of RT cores and Tensor cores, but those are rumored to be 80 and 320, respectively, compared to 82 and 328 on the GeForce RTX 3090. NVIDIA's flagship card also boasts 10,496 CUDA cores and the same 384-bit memory bus.
The sum of these specs is a card that should perform remarkably close to the GeForce RTX 3090, delivering potent performance for 4K gaming for less money. It will have half the amount of memory, though bear in mind that the GeForce RTX 3090 is essentially this generation's Titan model, which is best suited for creators.
As for pricing, that is still up in the air. All we know for sure is it will cost less than $1,499 (GeForce RTX 3090) and more than $699 (GeForce RTX 3080), at least in terms of the MSRP. Like every card, the Ti variant is likely to sell out immediately and command inflated prices by marketplace sellers.