It is looking increasingly likely that the recent photo of a pallet of MSI GeForce RTX 3080 Ti Ventus 3X OC graphics cards being prepped for shipment from China to United States is real. And the US is not the only place the upcoming SKU is bound for—a Polish retailer has already put up a placeholder listing for the new card.
Over at K-Com, the listing labels the card as "MSI GeForce RTX 3080 Ventus 3X OC 12G GDDR6X," which is pretty much the same as the labels that are visible in the aforementioned photo. There are no accompanying press renders or actual pictures of the card in the listing, and it does not mention a price or any other details. Here's a look... 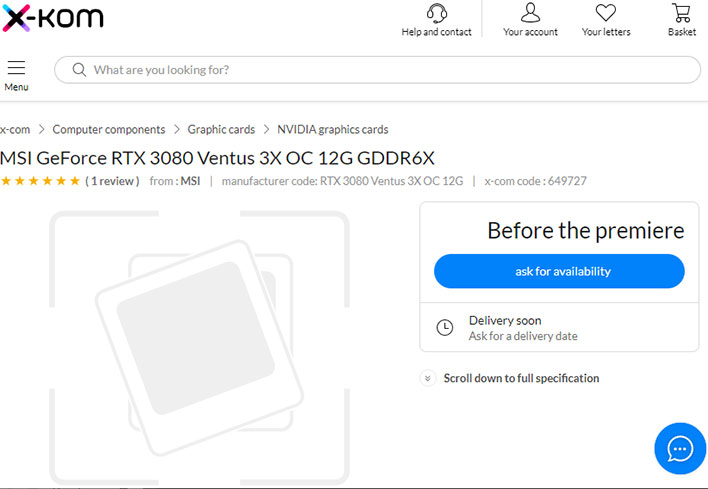 For those who are interested, the site is offering to alert users to the card's availability via email or telephone, if you want to share that information. Like every other modern GPU, however, we imagine it will sell out immediately, and then be incredibly difficult to obtain thereafter. The global shortage of silicon is just a crummy situation.
Everything we know so far about the upcoming GeForce RTX 3080 Ti comes from leaks and rumors, as NVIDIA has not said a peep about the new part yet. To that end, a recent rumor pegs the card as launching in May, priced at 7,999 Chinese Yuan.
That works out to around $1,230 in US currency, though pricing often varies by region—another rumor has the card launching at $999 in the US.
If it launched at that price, it would match AMD's Radeon RX 6900 XT, in terms of the MSRP. Obviously street pricing will differ, because of bots, scalpers, cryptocurrency mining, and every other factor contributing to the shortage. But in terms of where the card is positioned, it seems NVIDIA is looking to steal some thunder from AMD's flagship GPU.
As for the specifications, the retail listing doubles down on previous leaks and rumors suggesting the card will arrive with 12GB of GDDR6X memory. Earlier rumors pointed to the card having 20GB of memory, but it seems NVIDIA changed its mind at some point. Other rumored specs include 10,240 CUDA cores, a 1,365MHz base clock, and 1,665MHz boost clock.