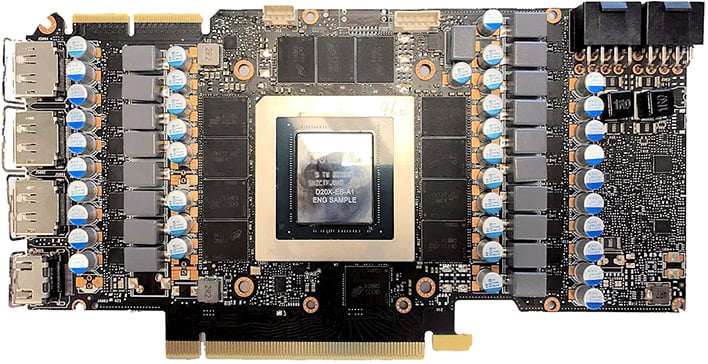 Who wants to see some naked pictures? Of a graphics card, I mean! (Get your mind out of the gutter!). You are in luck, then, because there are some images floating around of NVIDIA's latest Ampere cards, with the cooling shroud removed. One of them shows the GeForce RTX 3090 (pictured above) and the other depicts the GeForce RTX 3090.
Those are NVIDIA's top consumer cards at the moment. To recap, NVIDIA initially launched Ampere as a machine learning GPU, in the form of the A100, then followed suit with its GeForce RTX 30 series, including the $499 GeForce RTX 3070 (supposedly faster than a GeForce RTX 2080 Ti), $699 GeForce RTX 3080 (supposedly twice as fast as a GeForce RTX 2080), and $1,499 GeForce RTX 3090 (basically a new generation RTX Titan, under a different name).
The shot of the GeForce RTX 3090 comes courtesy of Bilibili forum member Yuuki_Ans, who says it is an engineering sample (according to a Google translation of the post). Notice the dozen dual-sided memory modules that surround the GPU. The GeForce RTX 3090 is equipped with 24GB of GDDR6X memory on a 384-bit memory bus. It also features 10,496 CUDA cores, along with a 1.4GHz base clock and 1.7GHz boost clock.
There are two 8-pin PCIe connectors visible in the above photo, with the card rated at 350W (NVIDIA recommends a 750W PSU). And on the upper-left side of the PCB, we can see the NVLink connectors, for pairing multiple graphics cards.
Moving on, here's a look at a naked GeForce RTX 3080... 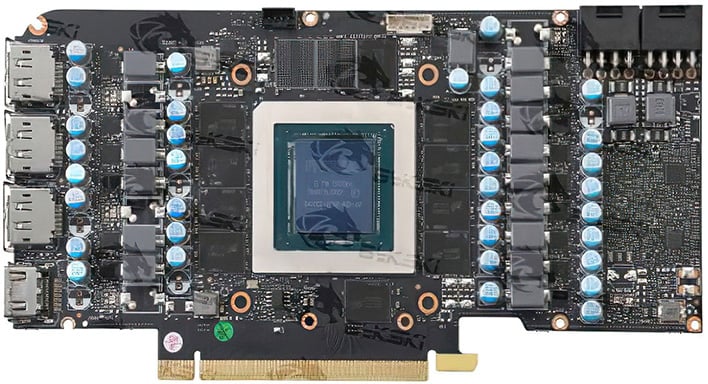 This photo comes from an Aliexpress listing for a Bykski GPU water block. Here we see 10 double-sided GDDR6X modules (two are 'missing' above the GPU), for a total of 10GB of memory on a 320-bit bus. Other specs include 8,704 CUDA cores, a 1.44GHz base clock and 1.71GHz boost clock, and a 320W rating (with NVIDIA also recommending a 750W PSU).
Like the GeForce RTX 3090, this card sports two 8-pin PCIe power connectors, but it lacks any NVLink connectors.
Both cards are reference designs. They differ a bit from the PCBs that NVIDIA uses for its Founders Edition models, as those have a triangular section cut out on the right side to accommodate the company's fancy new cooling shroud. NVIDIA's hardware partners will instead leverage traditional custom cooling designs.
The GeForce RTX 3080 will be available to purchase starting September 17, followed by the GeForce RTX 3090 on September 24 and the GeForce RTX 3070 on October 15.