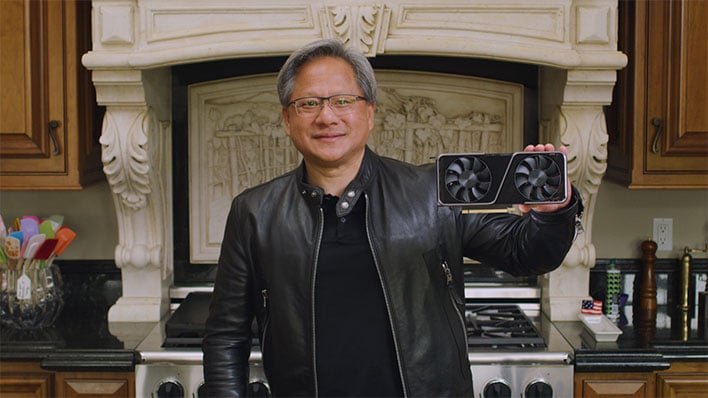 Could NVIDIA be cooking up a GeForce RTX 3070 Ti graphics card, possibly to disrupt AMD's upcoming Radeon RX 6000 series launch? Well sure, it could be, but is such a move actually plausible? The answer to that question is also 'yes', if you are willing to put stock in a rumoring suggesting NVIDIA is readying a new variant of its GA102 GPU.
The GA102 is based on Ampere, and is what powers NVIDIA's GeForce RTX 3090 (GA102-300-A1) and GeForce RTX 3080 (GA102-200-KD-A1) graphics cards, in the consumer space. Both of those cards are out now, at least technically—finding one in stock at a retailer at MSRP is next to impossible, and demand will likely outstrip supply into next year.
Interestingly, it was previously rumored that NVIDIA was prepping versions of the GeForce RTX 3080 and GeForce RTX 3070 with twice as much memory as the launch models, which would equate to 20GB and 16GB, respectively. But more recently, it was reported that NVIDIA decided to cancel those upgraded models.
Who knows if any of that is true, but one thing we are confident about is that more Ampere cards are coming. This will include more affordable models, as well upgrades to its current stack. When and what exactly is on tap, we can't say, because NVIDIA has not announced anything beyond its initial GeForce RTX 30 series cards yet.
This brings us back to the question we posed above, and it is an interesting one, in light of leaker @kopite7kimi claiming there is a "new spec of GA102, between 3080 and 3070." They claim the specific GPU is the GA102-150-KD-A1
According to their information, the GPU features 7,424 CUDA cores and a 320-bit memory bus. Here is how that compares to the existing stack...
Further down the thread, the leaker suggests it will have 10GB of memory, but is not quite sure of the type (GDDR6 or GDDR6X, presumably).
It is interesting to speculate, but also bear in mind that NVIDIA is prone to surprises. For example, the GeForce RTX 30-series launched with more CUDA cores than most of the leaks suggested leading up to the official announcement. So even if there is a GeForce RTX 3070 Ti waiting in the wings, the final specifications could change, depending on how NVIDIA wants to counter AMD's upcoming cards.
Also bear in mind that the GeForce RTX 3070 is not even out yet. It was originally supposed to land on retail shelves on October 15, but NVIDIA pushed it back to October 29 ostensibly to make more units available, but probably to steal the thunder from the Radeon RX 6000 series, which will be announced a day prior.