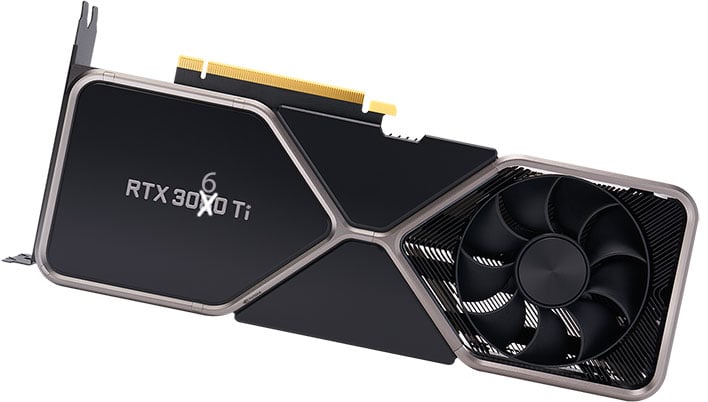 First of all, let's address the obvious—isn't the image above the most convincing Photoshop job you have ever seen? No? Well, I would agree with you hurtful assessment. But since NVIDIA has not yet announced a GeForce RTX 3060 Ti graphics card (or even a regular GeForce RTX 3060), I have to work with what is available. For now, anyway, because rumor has it a launch is just a month away.

Wait, wasn't the GeForce RTX 3060 Ti tipped to release this month? It was, according to some supposed preorder listings we wrote about last week. And if that was indeed the plan, the latest chatter suggests it has been delayed slightly, into early December. Assuming any of this is legit information, of course—the leak and rumor scene is not the most reliable, after all.
Let's back up a tad and see where things stand on an official basis. On September 1, NVIDIA unveiled its GeForce RTX 30 series, which is its Ampere lineup for consumers. These are the models (with links to our reviews)...
It's a solid lineup, but then AMD last week unveiled its highly-anticipated Radeon RX 6000 series, consisting of the Radeon RX 6900 XT ($999), Radeon RX 6800 XT ($649), and Radeon RX 6800 ($579). AMD is making some big performance claims, and it looks like we have a real shootout on our hands at each of the three tiers.
We know more cards are coming from both manufacturers, because modern GPU generations do not stop at just three SKUs. The GeForce RTX 3060 Ti could be one of them. According to Expreview, NVIDIA originally intended to launch the GeForce RTX 3060 Ti on November 17, but has now postponed the release to December 2.
NVIDIA never announced the GeForce RTX 3060 Ti, so if the information is accurate, it is not technically a delay. This all boils down to strategy—with regards to inventory and whatever each company deems is the best timing to compete with what the other has to offer.
It is said the GeForce RTX 3060 Ti features a GA104 GPU with 4,864 CUDA cores, along with 8GB of GDDR6 memory (14Gbps) on a 256-bit bus. While the memory arrangement is the same as the GeForce RTX 3070, it has fewer CUDA cores, and would have less Tensor cores and RT cores as well. As for pricing, word around the rumor mill is that it would be around $400.
Whether any of this is true we can't say for sure, only that more affordable cards will definitely be coming, whatever they might be.