Tell your mother, tell your father, tell your friends and everyone you know, the the Great Graphics Card Shortage of 2020-2022 is finally over! Okay, that's being a tad dramatic, and not wholly accurate. However, the situation is definitely improving, to the point where NVIDIA and its hardware partners have kicked off a GeForce RTX 30 series "Restocked & Reloaded" campaign.
What does that really mean? In NVIDIA's words, "GeForce RTX series graphics cards are now available!" We checked the claim and several SKUs really are back in stock, and at prices that are closer to MSRP than they have been in a very long while.
It's not all peaches and cream, though. If you're on the hunt for a Founders Edition model, you'll likely strike out. Same goes for custom models at FE (reference) pricing. But give it some time and that could change as this campaign stretches its legs. The alternative is that NVIDIA looks silly for trumpeting the return of graphics cards only for there nothing available at launch pricing. 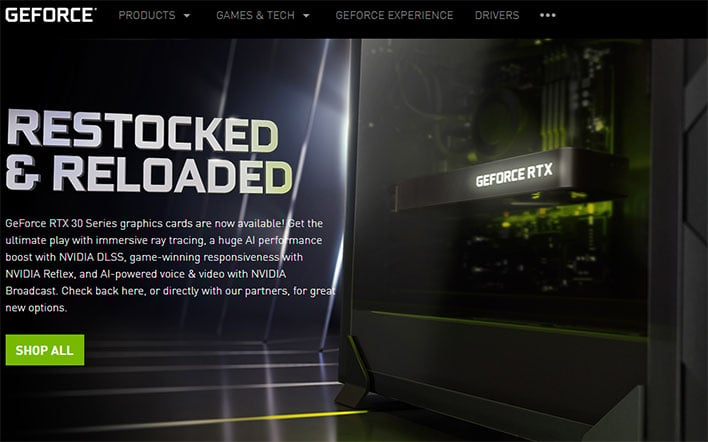 You can hit up NVIDIA's Restocked & Reloaded page for shopping links to every GeForce RTX 30 series model (or if you're only interested in EVGA's models, hit up EVGA's inventory page). To save you some time, here are a few models we found that are in stock...

Bear in mind that custom cooled and factory overclocked models often carry higher MSRPs than NVIDIA's Founders Edition models. Nevertheless, we've compared prices to FE equivalents above because those MSRPs have not fluctuated, and they provide a baseline to compare the overall value.
There are more cards available than the ones we listed. These tend to be the cheapest and are all in stock at the time of this writing, save for the EVGA GeForce RTX 3050 XC Gaming for $299.99—it's on backorder, but is also available to add into your cart.

The general takeaway here is that the current GPU situation is the best it has been in a very long time. There's still room for prices to drop further and availability to improve, but at least gamers have better options that paying exorbitant scalper pricing on eBay.
Also keep in mind that Intel will be launching its first Arc Alchemist desktop graphics cards later this year, and depending on how that goes, it could put pressure on AMD and NVIDIA to lower prices. Likewise, we have Ada Lovelace (NVIDIA) and RDNA 3 (AMD) launches looming as well.