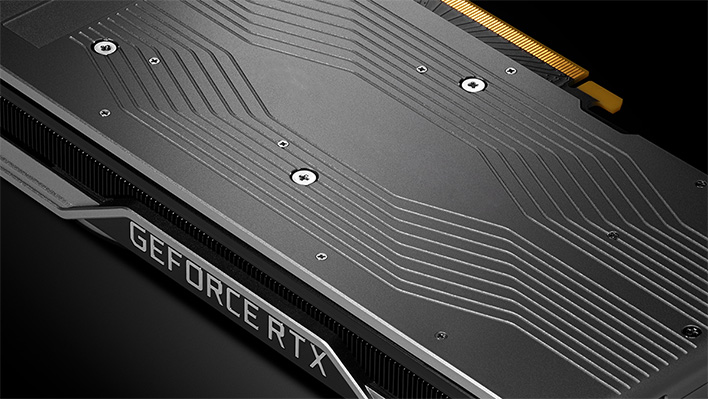 The ongoing leaks and rumors surrounding NVIDIA's next generation graphics cards, presumably based on Ampere, should be coming to an end soon. That's because NVIDIA is hosting a special GeForce event on September 1, 2020, where it will presumably announce its upcoming lineup. Until then, there is still room for some last minute leaks, one of which claims to have the skinny on video memory arrangement.
Like everything else related to the specifications for NVIDIA's upcoming GeForce RTX 3000 series, take this with a lick of salt, because it is not official information. Disclaimer out of the way, notable leaker and Chiphell forum user wjm47196 claims to have confirmed how the memory arrangement will shake out on NVIDIA's next-gen cards.
It's not clear where exactly the supposed confirmation comes from—an inside source at NVIDIA perhaps?—but according to the leak, we are looking at 10GB, 20GB, and 24GB configurations on cards with a 320-bit or 384-bit bus, and 16GB and 8GB configurations on cards with a 256-bit bus.
And according to "multiple sources" cited by Videocardz, the cards will use GDDR6X memory, which is not all that surprising. The question is, what specific graphics card models correlate to the different memory configurations? Here is how it could possibly end up...
Don't jot any of this down in pen or permanent market, because as we have learned with past launches, the final specifications do not usually line up precisely with pre-release leaks and rumors. And sometimes the leaked specs are way off.
That said, as a point of reference, the GeForce RTX 2080 Ti (TU102-300A-K1-A1) features 4,352 CUDA cores and 11GB of GDDR6 memory at 14Gbps on a 352-bit bus, giving it 616GB/s of memory bandwidth. As laid out, the GeForce RTX 3080 would effectively replace it, even though it is rumored to have slightly less memory and a narrower memory bus.
Exciting times await.