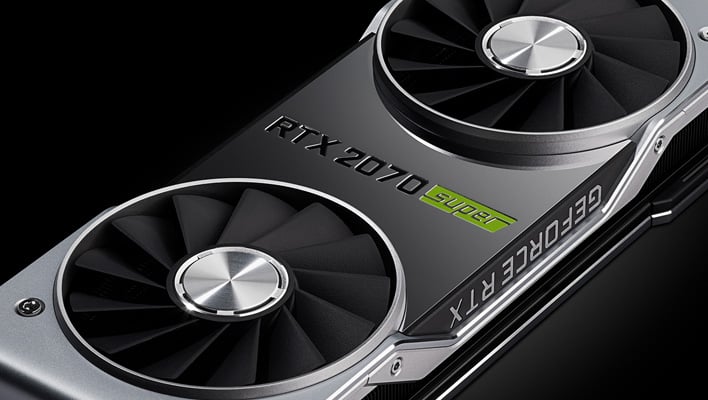 I would not say it has been a good, long run for the GeForce RTX 2070 Super, but it has certainly been a good run, albeit a short one. As in, the card is just under a year old, and there is already chatter that NVIDIA is discontinuing the SKU. The reason? To make room for a new generation of graphics cards based on Ampere, of course.
To be perfectly clear, there is no official confirmation from NVIDIA that the GeForce RTX 2070 Super is getting the Old Yeller treatment. However, according MyDrivers, the SKU has been "completely discontinued," with the last batch of chips having gone out to NVIDIA's hardware partners. No new orders for the GeForce RTX will be accepted, the report states.
The GeForce RTX 2070 Super was part of a refresh to NVIDA's Turing stack. NVIDIA also launched Super variants of the GeForce RTX 2080 and 2060, and GeForce GTX 1660 and 1650.
According to Videocardz, the GeForce RTX 2070 Super is one of four Turing models to be discontinued so far. The others include the GeForce RTX 2080 Ti, GeForce RTX 2080 Super, and GeForce RTX 2070. If true, then NVIDIA is essentially gutting its high-end graphics card lineup in preparation for upcoming Ampere-based cards.
What about the rest of the lineup? As the story goes, NVIDIA is not planning to replace its current crop of mainstream graphics cards with Ampere, at least not at the outset. Higher end parts will debut parts, and then eventually we will see more affordable Ampere options.
That's if the rumors and leaks are true. It's hard to predict what exactly NVIDIA will, given the unique situation with COVID-19, and an impending launch by rival AMD, with Navi on the horizon.
All that said, there are still a bunch of GeForce RTX 2070 Super cards to be found. However, glancing at Newegg, there is only one model priced at $499.99, which is the Gigabyte GeForce RTX 2070 Super Windforce OC. It's still a good card overall, though if you can wait a bit, it's worth seeing what Ampere and Navi will bring to the table.
As for how long you'll have to wait, the same source indicates NVIDIA will launch Ampere to the consumer sector on September 17, starting with the GeForce RTX 3080 and/ore 3080 Ti. Then in October and November, we will see the debut of the GeForce RTX 3070 and 3060, respectively.