Good news for anyone who's been wanting to test run NVIDIA's top GeForce NOW RTX 3080 cloud gaming tier, but were reluctant to spend $99.99 on a six-month subscription. Now you don't have to. NVIDIA today added a single month membership option priced $19.99, with the same benefits as a longer term commitment. In terms of the cost of entry, that's a more affordable play.
Shelling out for a six-month sub is still the cheaper route in the longer-run. It runs $99, which works out to $16.67 per month. But if you're not in a position to plunk down a Benjamin right off the bat, or otherwise aren't sure about a six-month commitment for NVIDIA's top tier, you now have an alternative option. Whether signing up for one month or six months, the perks are the same.
"GeForce NOW RTX 3080 memberships boost nearly any device into a powerful gaming rig. Our highest offering is capable of streaming at up to 1440p resolution and 120 frames per second on PCs, native 1440p or 1600p at 120 FPS on Macs, and 4K HDR at 60 FPS on SHIELD TV," NVIDIA explains. 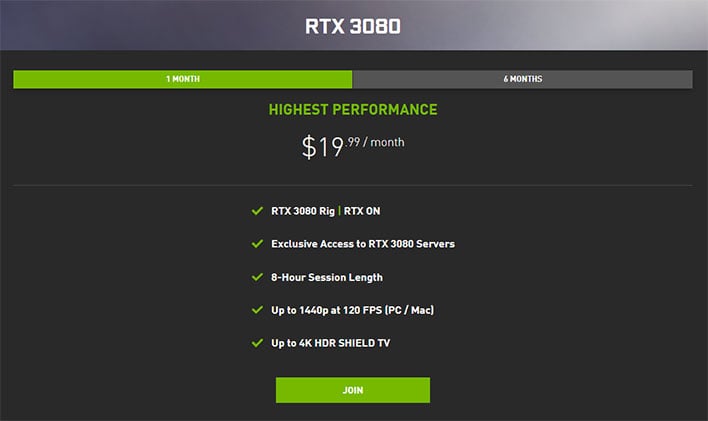 You can check out our GeForce NOW RTX 3080 review for our full thoughts, but the truncated version is that it's pretty damn good. Having access to what's essentially a killer gaming rig in the cloud is especially attractive right now when discrete GPUs are still so hard to come by (though at least they're coming down in price).
In addition to the new one-month subscription option, NVIDIA also added half a dozen more games to GeForce NOW, including Buccaneers!, Distant Worlds 2, Ironsmith Medieval Simulator, Bus Driver Simulator, Martha is Dead, and Survival Quiz CITY.
The new one-month subscription option is available immediately.