How many quarters in a row can NVIDIA set record highs in revenues? At least one more, is apparently the answer. After smashing earnings during its fiscal third quarter with a then-record $7.1 billion, NVIDIA ended its fiscal year with another monster quarter, reporting a new high of $7.64 billion, which is a massive 53 percent increase from last year.
Once again, it was big growth in both the data center and gaming sectors that accounted for the lion's share of NVIDIA's huge earnings. The two combined for more than $6.68 billion of NVIDIA's total haul last quarter. It was nearly an even split, too. Gaming is still the biggest breadwinner with $3.42 billion in revenue last quarter, but the data center nearly matched that total, accounting for $3.26 billion. 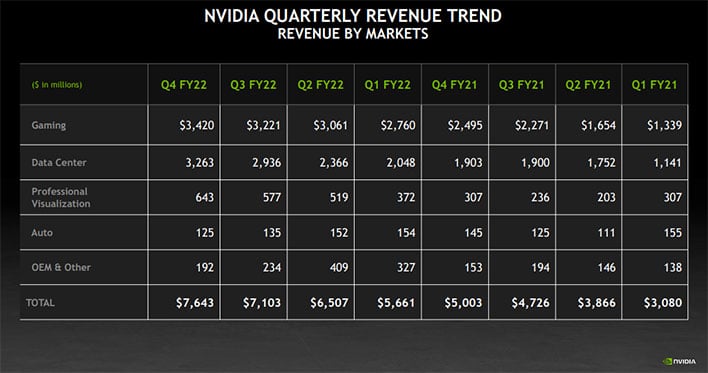 "We are seeing exceptional demand for NVIDIA computing platforms," said Jensen Huang, founder and CEO of NVIDIA. "NVIDIA is propelling advances in AI, digital biology, climate sciences, gaming, creative design, autonomous vehicles and robotics—some of today's most impactful fields."
Jensen also noted that NVIDIA is riding strong momentum across various businesses into the new year. More than just a GPU hardware company, NVIDIA continues to gain traction on the software side with business models arising from AI, Omniverse, and DRIVE.

GTC is right around the corner too, and Jensen said NVIDIA will "announce many new products, applications and partners." Getting a head start, NVIDIA yesterday announced a partnership with Jaguar Land Rover that will see all new vehicles starting in 2025 leverage its DRIVE Hyperion 8 platform.
NVIDIA's big quarter comes on the heels the company calling off the Arm acquisition. Appeasing regulators proved more challenging than anticipated, and as a result, NVIDIA gave up a $1.25 billion breakup fee. At the same time, NVIDIA actually paid more than that for long term licensing and will continue to employ Arm's IP in some of its designs.
"NVIDIA's work to accelerate computing and our overall strategy will continue as before. Our focus is accelerated computing. We are on track to launch our ARM-based great CPU, targeting giant AI and HPC workloads in the first half of next year. Our 20-year architectural license to ARM's IP allows us the full breadth and flexibility of options across technologies and markets," Huang said during an earnings call.
What about the ongoing GPU shortage? NVIDIA shied away from addressing the topic head on, and said it has "limited visibility" into how much of a factor demand from cryptocurrency miners is having on the situation. That said, NVIDIA's dedicated cryptocurrency mining processor revenue tallied a comparatively low $24 million.
When asked about supply constraints on the wafer side as it applies to the data center, Huang said he expects it to "improve each and every quarter going forward," and "pretty substantially in the second half" of this year. So perhaps that will translate over to gaming GPUs as well.
Looking ahead, NVIDIA anticipates another record-setting quarter on the horizon, with revenue expected to be $8.1 billion.