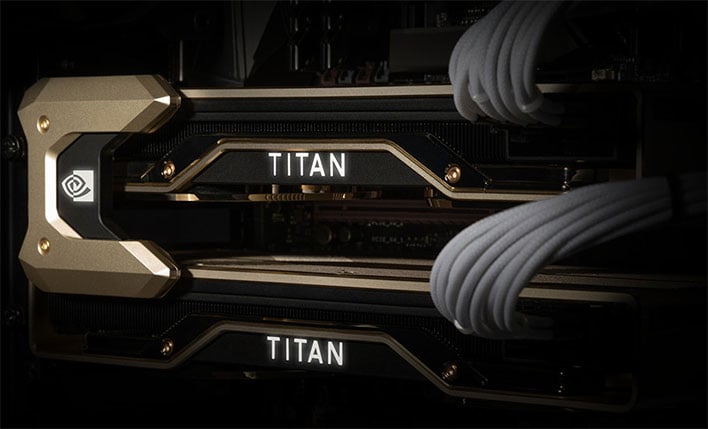 Unlike a few years ago, GPU makers are not really pushing the use of multiple graphics cards, at least not as heavily as they once were. Even so, NVIDIA has not abandoned the technology. Incidentally, recent driver releases seem to support a checkerboard rendering scheme that can improve performance on SLI setups.
This is not a brand new technique. The developers of Rainbow Six Siege used it as a form of anti-aliasing. In addition, Sony added hardware to the PlayStation 4 Pro to support checkerboard rendering. And if you go all the way back to 1993, Doom used a similar technique in the low detail mode.

As for NVIDIA, 3DCenter forum member Blaire wrote up a post on his discovery of a checkerboard rendering mode being available in graphics drivers from the R435 development branch. It seems NVIDIA stealthily added the toggle—there has been no announcement or mention in any release notes, and it can only be enabled using the NVIDIA Profile Inspector tool on systems running multiple graphics cards. Have a look...

According to Blaire, this offers more efficient data and memory access between Turing-based graphics cards with the NVLink interface. It's also said to work with DirectX 10 and higher, giving it a potentially wide berth of games support.
Is it actually useful, though? Blaire found that checkboard rendering worked better than the older alternate frame rendering (AFR) mode for the most part, yielding "roughly between 30-60 percent" better performance, depending on the game, resolution, and settings. He also posted some gameplay footage...

As an experimental feature, you should not expect checkerboard rendering to work in every game. In fact, Blaire posted a list of a bunch of games with notes next to each one. Here's a small sample...
The list goes on—hit the link in the Via field to view the post in its entirety. And if you try this out for yourself, let us know in the comments section below how it works out.