The automotive industry is quickly moving towards autonomous capabilities for cars and trucks to make driving from place to place less demanding/stressful and safer. However, a lot of computing power is needed to process data from the various cameras, sensors, and collision avoidance hardware mounted on today's vehicles. The faster that this data can be processed, the better.

To this end, NVIDIA has announced the development of its DRIVE Atlan platform, which is its latest system on a chip (SoC). NVIDIA isn't providing many details on the architectural details behind Atlan other than the fact that it features next-generation Arm cores and GPU architecture (Ampere-Next).

Also on deck will be the BlueField data processing unit (DPU), which is partly why NVIDIA calls DRIVE Atlan an "AI Data Center on Wheels." The DPU manages various tasks, including managing networking, security, and storage services for autonomous vehicles. Security will play a prominent role in future autonomous cars, as we've seen how easily online websites can be hacked with disastrous results concerning user privacy and leaked IP. 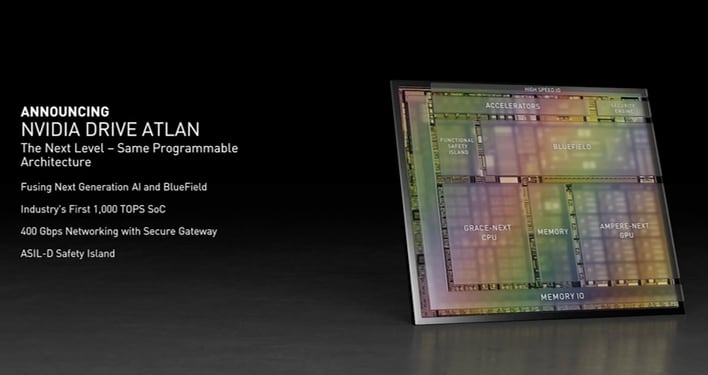 But when we're dealing with multi-ton autonomous vehicles hurtling down city streets and highways and high rates of speeds, the stakes are even higher, and lives can be put at risk if computing systems are hacked. BlueField will provide a secure enclave to provide further protection against cyberattacks and potential data breaches.

"The transportation industry needs a computing platform that it can rely on for decades. The software investment is too immense to repeat for each car," said NVIDIA CEO Jensen Huang. "NVIDIA DRIVE is the most advanced AI and AV computing platform, with rich global software and developer ecosystems, and architecturally compatible for generations."

Although NVIDIA hasn't provided us with specifics on core counts and specs for the CPU and GPU, the rate peak performance tells the story. According to NVIDIA, its DRIVE Xavier platform in current production automobiles is rated at 30 TOPS of compute performance. DRIVE Orin, first announced in 2019, and shipping with vehicles starting in 2022, is rated for 254 TOPS. DRIVE Atlan provides a 4x uplift in performance compared to Orin at 1,000 TOPS. However, it should be noted that the first production vehicles using DRIVE Atlan to power their autonomous systems won't arrive until 2025 at the earliest.