Is the PlayStation exclusive God of War definitely headed to PC? For a brief moment, it seemed as though a GeForce NOW database leak essentially confirmed it would be headed to another platform, but not so fast—according to NVIDIA, yes, the leak is legitimate, but no, the games listed are not necessarily bound for the PC after all.
The intrigue began when developer Ighor July posted an article on Medium explaining how he "accidentally" stumbled upon a confidential list of games in the GeForce NOW database.
"About a half year ago, NVIDIA GeForceNOW service worked differently. You could launch Steam directly and after that select a game of your choice. Most of the games are locked since GFN limitations, but I figured out how to run games which are not officially available on their website," July explains. "I’ve managed to play a Gas Guzzlers Extreme at that time. So I wanted to find a way to get a full list of games available for GFN."
This led him to inspect the GeForce NOW client software, and while poking around the console.log file, he came across the main URL used for web requests. One thing led to another, and he uncovered a massive list of games—over 18,000 of them. 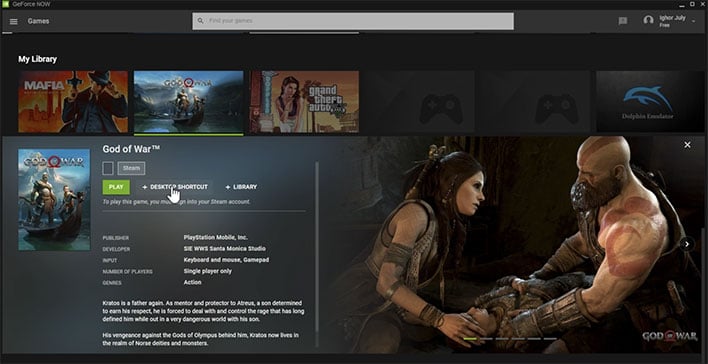 A lot them are unannounced for GeForce NOW and/or PC, including God of War, Final Fantasy VII Remake, Resident Evil 4 Remake, Returnal, and others. NVIDIA has since plugged up the leak, but you can still a view a full list of the GeForce NOW game and app contents on GitHub, uploaded by SteamDB's Pavel Djundik.

So, what's going on? Nothing more than a list of actual and speculative titles, according to NVIDIA, which says nothing in the leak should be viewed as confirmation that it is headed to PC.

"NVIDIA is aware of an unauthorized published game list, with both released and/or speculative titles, used only for internal tracking and testing. Inclusion on the list is neither confirmation nor an announcement of any game. NVIDIA took immediate action to remove access to the list. No confidential game builds or personal information were exposed," NVIDIA said in a statement.
So there you have it. A lot of the titles fall into the "placeholder" category or were used for testing the service internally. That said, don't rule out God of War landing on PC. Bear in mind that Sony this past summer acquired Nixxes Software, which mentions "porting" among its list of specialties.