NVIDIA DLSS is an AI rendering technology used to increase performance while allowing players to still enjoy high-fidelity and quality in games. As of late, this technology has been added to a myriad of games, such as Rainbow Six: Siege earlier this year. Now, the tech is slated to come to five new game titles in the coming weeks.

Announced today, NVIDIA DLSS will make its way to Facepunch Studio's multiplayer survival game Rust and becomes available on July 1st. Rust's Project Lead, Helk, explained that this is important because, "in Rust split-second reactions can be the difference between life and death, with NVIDIA DLSS offering our players a performance boost, without sacrificing visual quality and a better overall experience, it's a win-win." DLSS will also be coming to LEGO Builder's Journey on June 22nd, Doom Eternal on June 29th, The Ascent on July 29th, and Red Dead Redemption 2 at some point in the future. However, we will likely see many more games add this technology as time goes on due to the following announcement. 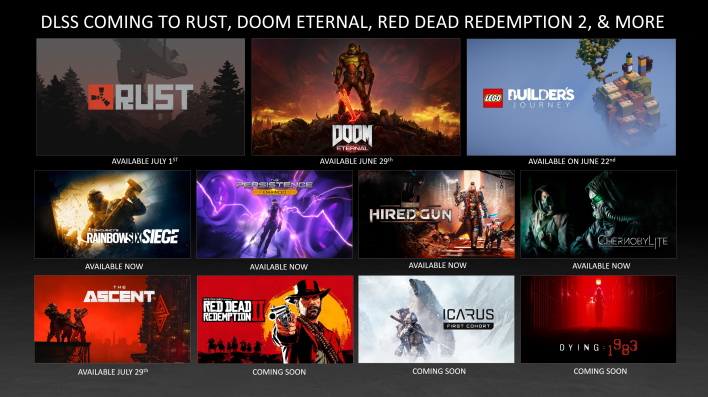 NVIDIA also mentioned that DLSS has been available as a free plugin for Unreal Engine 5 since June 17th. Moreover, DLSS support will be arriving when Unity update 2021.2 releases later this year. Reportedly, "developers have brought DLSS to a dozen of their own in-house engines," as well, which streamlines DLSS implementation for future titles.  This also means that DLSS could be potentially baked in to games like the upcoming Battlefield 2042, which would be quite nice.

On June 22nd, NVIDIA DLSS support for Vulkan API games will also become available. This enables "Linux gamers to use the dedicated AI Tensor Cores of their GeForce RTX GPUs to accelerate frame rates in DOOM Eternal, No Man's Sky, and Wolfenstein: Youngblood." Furthermore, in the Fall, DLSS-enhanced DirectX titles running via Proton will be supported as well, so the Linux gaming ecosystem will get a boost overall.

It is exciting to see NVIDIA push its technology forward across the gaming industry as it only provides benefits to all gamers. We cannot wait to see what DLSS gets added to next, so stay tuned to HotHardware for updates. Also, let us know what you think of NVIDIA's DLSS push in the comments below.