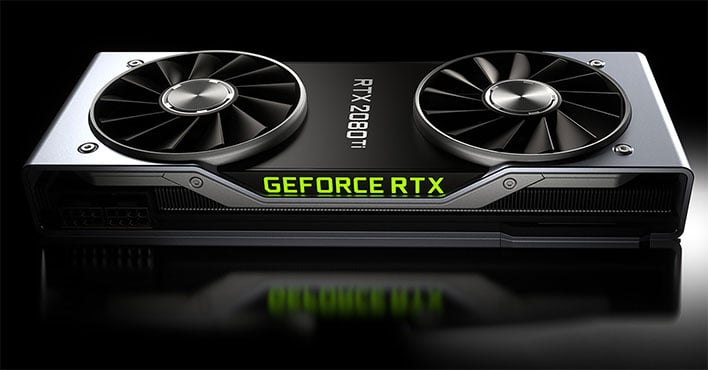 Well, what do we have here? A fresh rumor making the rounds suggests NVIDIA is preparing to add a GeForce RTX 2080 Ti Super model to its graphics card lineup, which would make its top consumer Turing card even faster. It might even be faster than the Titan X, at least in instances where the added memory does not come into play.
I'll expand a bit on the comparison in a moment, but first, here is a refresher on the GeForce RTX 2080 Ti's specifications (reference model)...
Even after NVIDIA refreshed its GeForce RTX 2070 with a Super model, there remains enough separation between the two that doing the same on the GeForce RTX 2080 Ti is not really necessary. Nevertheless, it might be happening.

Twitter user kopite7kimi offered up a couple of details about the supposed card, saying the GeForce RTX 2080 Ti Super will arrive with 4,608 CUDA cores and 16Gbps memory. If true, it would be sporting a full Turing TU102 GPU, just like the Titan RTX. That also means it would have 576 tensor cores, 72 RT cores, 288 texture units, and 96 ROPs.

Going with a full Turing TU102 GPU and faster 16Gbps memory might be the entirety of the upgrade. However, if NVIDIA really wanted to, it could also go with more memory and faster faster GPU clocks. Doing so would leave the Titan RTX in a precarious spot, though. Should the GeForce RTX 2080 Ti Super come to fruition as outlined in the leak, the Titan RTX would still have an advantage in the amount of memory (24GB versus 11GB) and the boost clock (1,770MHz versus 1,545MHz for the reference model, and 1,635MHz for the Founders Edition).
To make things easier to visualize, here are the core specs of Titan RTX, GeForce RTX 2080 Ti Super (as leaked), and GeForce RTX 2080 Ti (both reference and Founders Edition models)...
Will there actually be a GeForce RTX 2080 Ti Super, though? I can't say for certain, but it's worth noting that kopite7kimi has been correct in the recent past. In September, the user leaked some accurate details about the GeForce GTX 1660 Super and GeForce GTX 1650 Super, neither of which had launched at the time.
If this new card does end up launching, it will be interesting to see how it's priced. Hopefully NVIDIA sticks with the same MSRP as the non-Super model. That could lead to some tantalizing deals on the non-Super model as vendors look to rid themselves of the old inventory to make room for the new part.