A few weeks ago, Azure received an NVIDIA A100 upgrade to its virtual machines. Announced at GTC, NVIDIA is now building its supercomputer with the A100 platform across the pond. This behemoth, dubbed Cambridge-1, will be the most powerful supercomputer operating within the United Kingdom. It will become available to U.K healthcare researchers using AI to solve complex issues, such as COVID-19, by the end of the year.

The Cambridge-1 supercomputer will be an NVIDIA DGX SuperPOD supercomputer with over 400 petaflops of AI performance and eight petaflops of Linpack performance. This sort of horsepower would allow it to rank 29th on the TOP500 list of most powerful supercomputers in the world. Inside, it will feature 80 modular NVIDIA DGX A100 systems connected by NVIDIA Mellanox InfiniBand networking. Also, the modularity “enables the system to be installed and operational in as little as a few weeks.” When it is completed, NVIDIA will have invested approximately $51.7 million into the system. 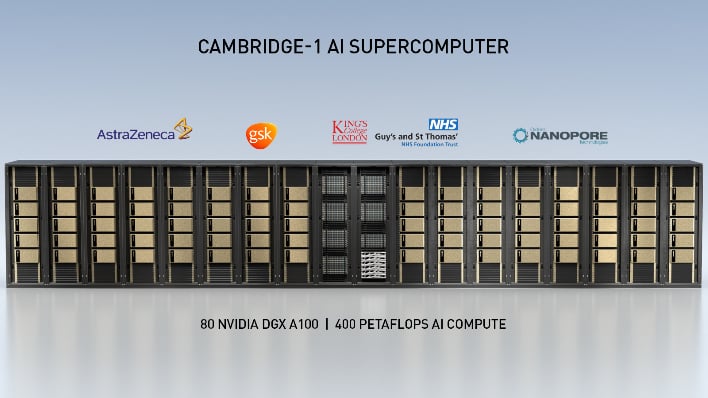 According to Jensen Huang, “The Cambridge-1 supercomputer will serve as a hub of innovation for the U.K., and further the groundbreaking work being done by the nation’s researchers in critical healthcare and drug discovery.” Upon launch, companies such as Glaxo Smith Kline (GSK) and AstraZeneca will tap the new supercomputer's power to complete research. Both companies are working on COVID-19 research and vaccines, and this sort of supercomputing could help immensely.

The research NVIDIA is driving with the Cambridge-1 supercomputer is set to be the first in a long line of future projects. After announcing its plans to acquire Arm, NVIDIA intends to develop an “AI Center of Excellence” at the ARM headquarters. Among other supercomputers, this new center will feature an Arm-based supercomputer. Eventually, Cambridge-1 will also be brought into the center, which will expand in the future.

With these significant investments in the field, NVIDIA is driving the world of AI at present. As it stands, healthcare is the current focus, but that will expand as the AI Center of Excellence grows. Once these developments are completed, NVIDIA will be a company to watch as they help to improve the world around us by harnessing and democratizing AI.