The many rumors about Nintendo's updated Switch with an OLED display that pelted us over the past few months were accurate, but the timing of the announcement was a bit off. The company surprised us all this morning by announcing the new OLED model without any fanfare. As expected, the new display panel measures 7 inches diagonally versus 6.2 inches for the original Switch.

While earlier rumors had indicated that the new Switch would support up to 4K resolutions, Nintendo brings us back down to earth by confirming that it only supports up to 1080p when docked. So, unfortunately, the hopes of gaming with the Nintendo Switch at 4K resolution with NVIDIA DLSS have gone up in smoke. Given that Nintendo is sticking with a maximum of 1080p output, we're going to assume that the NVIDIA Tegra X1 SoC hasn't been replaced.

On the plus side, Nintendo doubled the amount of onboard storage from 32GB to 64GB, and the shift from an LCD to OLED didn't ding the battery life. The Nintendo Switch with an OLED display is still rated at 9 hours of runtime. Additional physical differences (other than the larger display with slimmer bezels) include the fact that the new model weighs 0.71 pounds versus 0.66 pounds for the original, and that there is a vastly improved kickstand design. There’s also a sweet white and black color scheme available for the console and dock, which makes it look Stormtrooper-esque. 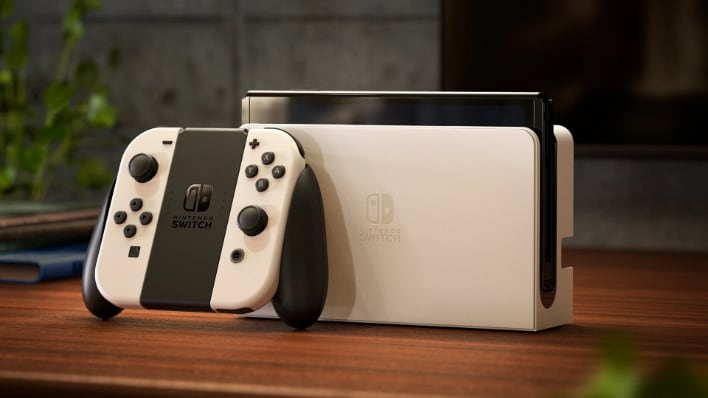 We have the feeling that the new OLED-equipped Nintendo Switch will be a hot seller this holiday season, as it is only priced $50 higher than the original ($349.99). Nintendo says that it will ship on October 8th; however, there is currently no information on preorders at this time.